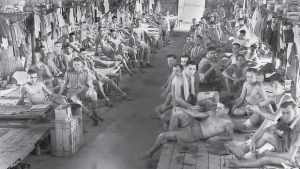 As we all know, being a prisoner of war is not a safe place to be. Growing us watching shows like “Hogan’s Heroes” gave the impression that the enemy was always nice to their prisoners, and that being in a POW camp was ok, but that wasn’t the reality of those camps. Of course, in the days of “Hogan’s Heroes” violence was just not shown on television. The world was a different place…at least for the people back home watching it on television. The reality of the POW camps was much different, as many of us have seen in newer shows about prisoners during wars. We have witnessed some of the atrocities that have been done…and we still aren’t seeing the true story, I don’t suppose.

One example of the true story is the Sandakan Death March. For some reason, when the Japanese were close to getting caught in their brutality, they decided that the best thing to do was to take the prisoners on a march deeper into the jungle so that the evidence of their torture was not found. In reality, they could have just left the prisoners in the camp…abandoned them, and they would have likely never been caught, but apparently it was more about retaliation over their loss in the war. One such march was the Bataan Death March in the Philippians and the deadly construction of the rail line linking Burma with Thailand.

Similar to that was the Sandakan Death March in Malaysia. It is not as well known, and in fact many Australians would like it to be removed from history…not from the history books, but they wish it had never happened at all. I can fully understand that, once I found out what the Sandakan Death March was all about. Still, I don’t understand why more people don’t know about it. There were 2,700 British and Australian prisoners of war interned there by Japanese forces, as the end of World War II 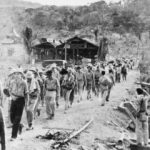 approached. The Sandakan Death March has been called that Australia’s worst military tragedy.

Sandakan was a brutal place. About 900 British soldiers were among the prisoners of war brought to Sandakan. Most of them did not survived. Prisoners interned here died slowly. They were starved and beaten. Toward the end of the war, when the Japanese decided to flee Sandakan, most of the remaining prisoners were marched to their deaths. Those who were strong enough to make it to the end of the trail were executed. Only six…a man named Owen Campbell and five others survived…and then only because they escaped. Campbell is the last living survivor, and a reminder that when war veterans pass away, a little piece of history dies with them. That is the saddest part of such horrific loss. When people forget about the atrocities of the past, the world is destined to repeat them. When life is viewed as so insignificant, then killing becomes easy, and the consequences of these killings is somehow pushed aside and even justified. That should never be allowed to happen…not in the POW camps, or in the streets of our cities. Bruce Scott, Australia’s minister for veterans affairs, referring to the prison guards at Sandakan said, “The proud and honorable title of soldier cannot be applied to those men.” The guards forced the prisoners to begin the death march from the camp at Sandakan as the Allies were approaching. The men were already very weak from being starved and beaten. Most of the men did not survive the march…succumbing to their conditions along the way. Those that survived the march were simply executed when they reached the end of the journey. That was even more brutal than the march itself.

Campbell returned to Borneo for a ceremony in March of 1999, back to the jungles where half a century ago his 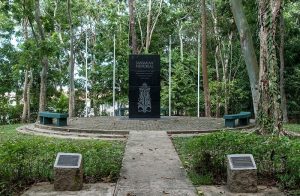 best mates were marched to their deaths. Wearing a row of ribbons and medals across his left breast pocket, Mr. Campbell, aged 82, stared straight ahead at a black slab of granite, a memorial to one of the most horrific…yet little-known…atrocities of World War II in the Pacific. “We come here to this place to help ensure that this story is not forgotten,” Bruce Ruxton, an Australian veteran, told the crowd assembled at the memorial site. “We acknowledge that great evil was done here, that inhumanity here reached such depths that shame us as human beings even to contemplate.” In a sign of the continuing sensitivities and anger surrounding the prison camp and death march, no Japanese were present at the ceremony.