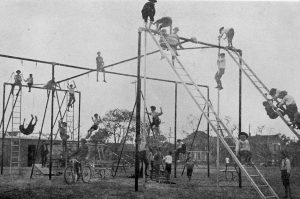 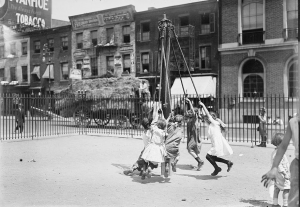 If children today were to see the playground equipment of yesteryear, I wonder if they would want to play on it, thinking it looked intriguing, or if they would simply walk away, saying that it looked boring. I suppose that to them, it probably would be boring. There weren’t any bright colored, shiny things to play on back then, and no mazes to crawl through in search of the prize…the slide at the end. I don’t know if I think that todays playground equipment is better, or worse. Or maybe, it’s just different…more advanced and inventive. I suppose that the playground equipment of earlier years required the child to be more inventive, where today’s maybe doesn’t.

In the 1900s, there were often pipe built structures without paint…not that it seemed to matter to the kids. People have looked back on that equipment and wondered if it was even safe. Well, probably it wasn’t, but when you look at some of the modern day equipment, you wonder the same thing. Kids have been climbing on structures for as long as there have been kids. It’s what they do. If they have nothing to climb on or jump on, they will just jump on the bed. Now tell me you didn’t. I don’t know of one physically capable person who can honestly say they didn’t jump on the bed. In the 1900s, ladders were used to get the kids to the top of the tall structures. I’m sure that was part of the concern, but the rock climbing addition of today, isn’t really any safer, and kids will climb up the outside of a structure whether there is a proper way to get to the top or not. Remember, there isn’t a child alive who hasn’t thought at one point or another, that they were invincible.

Modern playground equipment is often designed as a “fitness” tool. That wasn’t really necessary in years gone by, because there really was no such thing as a “couch potato” then. Kids didn’t have hand held electronic gaming devises to occupy so much of their time, so they went outside and played games. I remember running around the yard until dark, once my homework was done anyway. We never sat still…and that was at home. All we had there was a swing set. The rest was make believe. The school had swings, a slide, and the monkey bars, as 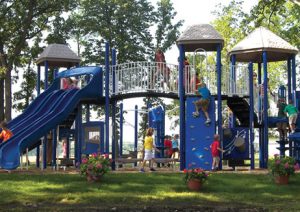 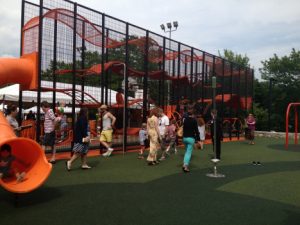 well as tetherball poles, but no ball if school was out. Still, the school was the place to play…especially in the summer, when playing there didn’t require class time too. While the tall structure with ladders of the 1900s, or even the pole swing of 1910, looked dangerous, my guess would be that there were no more injuries on it than any other type of playground equipment…but, I could be wrong. The way I see it…kids just aren’t notoriously careful.