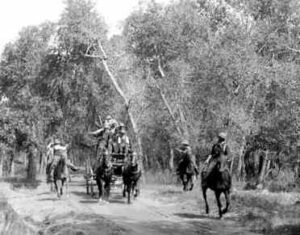 I can imagine a number of nicknames a stagecoach driver might want to have, one that no one would want to have. George Green was one of the most popular stagecoach drivers in the Sierra Mountain Range, driving for the Pioneer Stage Company between Placerville, California and Virginia City, Nevada in the 1860s. George had the nickname “Baldy” because of the sparse amount of hair he had on the top of his head. It was not the nickname “Baldy” that George would learn to hate, however. George was known for his good looks, standing about six feet tall with a large full mustache, but it was not his good looks or large mustache that earned him the nickname he hated either.

During his days as a stagecoach driver, Green drove many famous people including Ben Holladay, Horace Greeley, and Vice-President Schuyler Colfax. Nevertheless, Green was apparently not a very scary driver. On May 22, 1865, near Silver City, Nevada, three men robbed his stage of $10,000 in gold and greenbacks. I guess word must have gotten around, because more robberies followed that first one, and not only would the robbers not leave him alone, but the robberies were big news and the stories sold lots of newspapers. The Territorial Enterprise commented that Green had narrowly escaped scalping, and someone placed a sign near the robbery location saying, “Wells-Fargo Distributing Office, Baldy Green, Mgr.”

Green just couldn’t catch a break. Two years later his stage was robbed twice on successive days, and following another robbery on June 10, 1868, Virginia City’s Territorial Enterprise stated: “Baldy Green is exceedingly unlucky, as the road agents appear to have singled him out as their special man to halt and plunder, and they always come at him with shotguns.” Two more robberies occurred the same month, and you might say that the 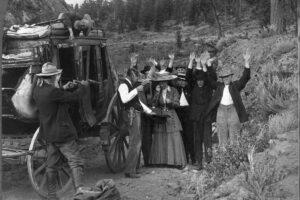 writing was on the wall. No one came right out an accused Green of being involved, but it had come to the point that they couldn’t take the risk of keeping him on anymore. Green was fired. Whether he was guilty or not, he was the driver most likely to be robbed. While he was never given that nickname, it is rather a fitting one.

Green didn’t let that stop him, however. He then went to hauling freight in Pioche, Nevada. I guess either he figured out how to stop the robberies, or freight haulers were less likely to be robbed. Either way, he managed to have more success in that trade that the stagecoach career. Later on, he even served as Justice of the Peace in Humboldt County, Nevada.