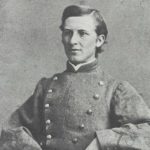 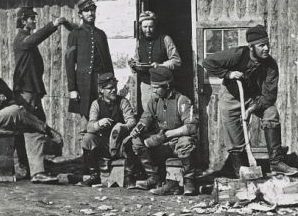 During the Civil War, the fighting was much different than these days…not just in the weapons used, but in a much bigger way. To send men out to battle in the winter was just too risky. Impassable, muddy roads and severe weather impeded active service in the wintertime. In fact, during the Civil War, the soldiers only spent a few days each year in actual combat. The rest of the time was spent getting from one battle to another, and wintering someplace because of bad weather. Even the rainy seasons caused problems, because rain brings muddy roads, and you can’t move heavy cannons on muddy roads. They get stuck. The soldiers tended to have a lot of time on their hands in the winter, and they couldn’t just go home either. In reality, disease caused more soldiers’ deaths than battle did.

The soldiers sometimes kept journals of their time, which is where so much of the information we have about their time, came from. One such soldier was Elisha Hunt Rhodes. The winter months were monotonous for the soldiers. There was really nothing to do, but they needed to be kept in shape and at the ready, so the solution became days spent drilling. I’m sure that the boredom caused tempers to flair at times too, but the down time allowed the soldiers some time to bond and have a little bit of fun, as well. Nevertheless, the main objective for the winter months was to stay warm and busy, because their survival depended on it.

Rhodes was in the Army for four years, and he kept a journal for all of that time. He was a member of the 2nd Rhode Island Rhodes and fought in every battle from the First Bull Run to Appomattox. He rose from the rank of private to the rank of colonel in four years. According to Rhodes, the winter months were pretty quiet for the soldiers. They didn’t fight many battles, and so the months were spent drilling or smoking and sleeping. Some of the troops gambled and others drank or even visited the prostitutes who hung out around the camps. Believe it or not, the soldiers actually welcomed Picket Duty, which is when soldiers are posted on guard ahead of a main force. Pickets included about 40 or 50 men each. Several pickets would form a rough line in front of the main army’s camp. In case of enemy attack, the pickets usually would have time to warn the rest of the force. Picket Duty became a welcome break from the day to day monotony, because in Rhoades words, “One day is much like another at headquarters.”

Rhodes spent most of his winter months in or near Washington DC, giving him more diversions than some soldiers in the Civil War, who were in more remote locations. On one such trip into town came on February 26, 1862, he took the opportunity to hear Senator Henry Wilson from Massachusetts speak on expelling disloyal members of Congress. After listening to the speech, Rhodes and his friend Isaac Cooper attended a fair at a 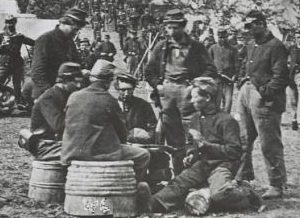 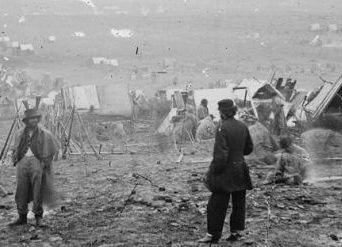 Methodist church and met two young women, who the soldiers escorted home. Like other soldiers, Rhodes welcomed the departure from winter quarters and an end to the monotony. “Our turn has come,” he wrote when his unit began moving south to Richmond, Virginia,in 1864. His winter break was over, and he would find himself back in battle again. Rhodes would survive the Civil War and after a long life, passed away on January 14, 1917 at 75.