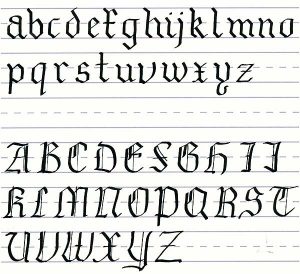 National Handwriting Day was established in 1977, and because of John Hancock’s birthday, January 23rd, and the fact that he was a signer of the Declaration of Independence, it was decided that his birthday would be the ideal day for this unique holiday. The day was started as a way to re-introduce people to the pen and paper. In a world where most writing is done by computer, and notes are in a smartphone, the idea of writing on paper has almost become strange. I think about my Uncle Bill Spencer, the genealogy patriarch of the Spencer family, and how important handwritten letters always were to him, and I can understand how this lost art was so heartbreaking for him. When I look at treasures we have found that contain the handwriting of our parents or grandparents, it definitely brings us closer to them. At least it makes us feel closer to them.

The Writing Instrument Manufacturers Association, looks at National Handwriting Day as a chance for everyone to re-explore the purity and power of handwriting. Of course, their true motive is to promote the consumption of pens, pencils, and writing paper, but that isn’t the worst thing in the world. While this holiday was invented during the 1970s, it is considered to be a holiday that is increasing in importance with the passing of each year, because the art of handwriting is gradually being lost as more and more people use computers, tablets, and phones to email, instant message, and text their thoughts. Some believe that handwriting is as unique to a person as a fingerprint. I agree, because when I look at a handwritten note from someone I know, I can usually tell you who wrote it.

The ancient Romans were the first to develop a written script for correspondence based on aspects they borrowed from the Etruscan alphabet. However, after the Roman Empire fell, the development handwriting would come to rest with various monasteries. The problem with that is that with so many styles, people couldn’t read or understand what other people wrote…until the 8th century, when Charlemagne decided to put an English monk in charge of standardizing a handwriting script. The resulting script, Carolingian minuscule, was one that featured lowercase letters and punctuation and was designed to be easily read by candlelight. And it was a script that was highly used up until the 15th century.

During the 15th century, Johannes Gutenberg came up with a denser style of writing script for use on printed parchments and in books. This Gothic script was used extensively on his printing press, but was not really very popular with the people. Finally, Italian humanists decided to go back to a Carolingian script and then invented a cursive form of it that would eventually become known as italic. From that point on, penmanship was seen as a symbol of status. The schools began education young scholars in its use during the 18th century. The mid-19th century in the United States, brought a cursive writing system developed by my 3rd cousin 5 times removed, Platt Rogers Spencer. His penmanship style became known as the Spencerian Method. It was widely taught and many schools quickly adopted its use, but it was eventually replaced by the Palmer Method, invented by Austin Norman Palmer, at the turn of the century. The Palmer Method would eventually be replaced by the D’Nealian script, invented by Donald Thurber. It was introduced into American schools in the late 1970s.

Unfortunately, handwriting began to decline during the 1980s. Typewriters and word processors were used for writing instead of a pen and paper. We all thought it was the wave of the future, and the advance of the technological age, but I wonder if we somehow missed the bigger picture. Schools began to eliminate handwriting courses, replacing them with typewriting and eventually computer classes, and the art of 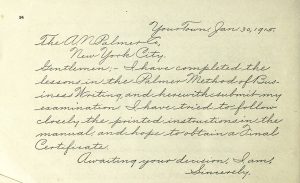 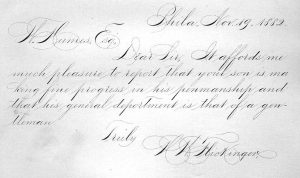 handwriting got lost in the excitement of something new. Now, it is in serious danger of disappearing altogether. As I contemplate the end of such an important part of history, and think of my Uncle Bill, and his understanding of its real importance, I realize just how big that loss really is. 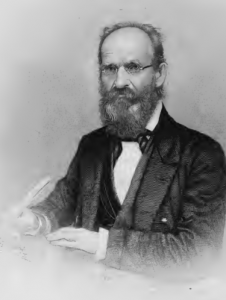 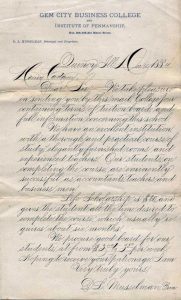 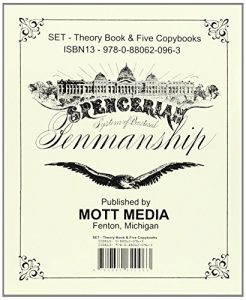