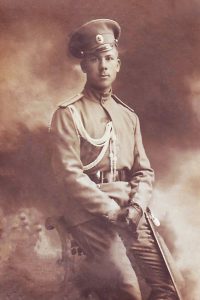 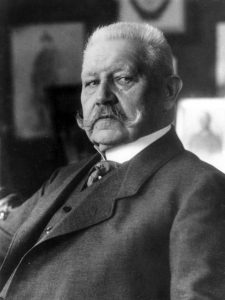 In what might today be considered almost post-apocalyptic, the Battle of the Osowiec Fortress, was nevertheless fought during World War I. The year was 1915, and World War I was in full swing. It was also an era of innovation in weaponry, and many were the never-before-seen weapons of warfare, as well as new and never-before-heard-of tactics.

The Germans had launched a full frontal attack on the Russian Osowiec Fortress, located in present-day Poland, at the beginning of July. Included in the attack were 14 battalions of infantry, one battalion of sappers, 24–30 heavy siege guns, and 30 batteries of artillery equipped with poison gasses led by Field Marshal Paul von Hindenburg. Russian defenses were manned by 500 soldiers of the 226th Infantry Regiment Zemlyansky, and 400 militia. The Russians were quite outnumbered.

On August 6, 1915, the German forces employed chemical weapons on the Russians. At 4am, after waiting for favorable wind conditions, the German attack began with regular artillery bombardment combined with chlorine gas. As the scene was described, “The gas caused the grass to turn black and leaves to turn yellow, and the dead birds, frogs, and other animals and insects were lying everywhere. Terrain looked like Hell.” The Russians soldiers either had no gas masks, or had only poorly made ones, and most soldiers used their undershirts as masks, with many soaking them in water or urine to help with their effectiveness at holding the gas at bay. I think most of us have heard of the horrors caused by the use of chemical warfare, and most people are vehemently opposed to such atrocity, because of the effects, which if not instantly deadly, can cause the victim to slowly die over a number of years, fraught with lingering health problems. Most of the Russian soldiers died immediately, but some survived the gas attack. Sub-Lieutenant Vladimir Kotlinsky, the highest ranking Russian soldier to survive the initial attack, rallied the other surviving soldiers. They decided to charge the advancing German lines…what choice did they really have.

Over twelve battalions of the 11th Landwehr Division, making up more than 7000 men, advanced after the bombardment expecting little resistance. They were met at the first defense line by a counter-charge made up of the surviving soldiers of the 13th Company of the 226th Infantry Regiment. The invading German forces were horrified when they saw what appeared to be zombie-like soldiers. The panic began when they first caught sight of the Russians, who were coughing up blood and bits of their own lungs, as the hydrochloric acid formed by the mix of the chlorine gas and the moisture in their lungs had begun to dissolve their flesh. The Russian men were covered in blisters and coughing up their own respiratory organs, the Germans were subsequently retreating. The Russian garrison suffered heavy losses, but some soldiers survived even after the final charge, and Chlorine gas barrage. The Germans had retreated so fast that they got caught up in their own c-wire traps. The five remaining Russian guns subsequently opened fire on the fleeing Germans. Kotlinsky died later that evening. The Russian soldiers had basically fought their last battle as they were dying…hence the name given to the battle…The Attack of the Dead Men.

The dying Russians could not hold the area for much longer, of course. The soldiers there were sick, dying, or already dead. The Germans threatened to encircle the fortress with the capture of Kaunas and Novogeorgiesk. Knowing their fort was lost, the Russians demolished much of the fortress and withdrew on August 18th. While 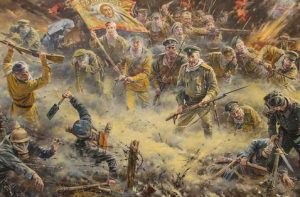 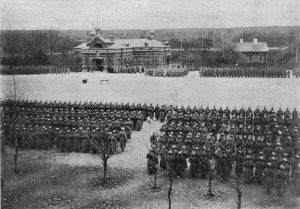 the German casualties were moderate to heavy, they were not nearly as bad as the Russian casualties of about 800 of the 900 men that were deployed at the fort. This story, although virtually unknown to the outside world, is a symbol of Russian military power and courage under fire. The story of this battle is commonly told and taught in Russian history classes.