As this day has approached, I have found it very hard to believe that my Uncle Bill Spencer, my dad’s brother, is turning 95 years old today. I remember the uncle from my childhood, full of life, and exciting stories. He was the man who taught me the game of Cribbage and challenged me to try to beat him. He never gave me the game, but rather made it a true victory when I was able to beat him. He never made me feel like a failure when I lost either, but rather told me that every game I played made me a better player, and he was right. I loved the times we had together playing cribbage. It will always be one of my favorite memories of my uncle. Over the years, we tried in vain to figure out a way to play long distance. That was one challenge that beat us. I suppose that in the age of computers, we might have found a way.

Uncle Bill is a unique kind of person, in that he found something he was interested in when he was just an 8 year old boy, and he never lost his passion for it. For Uncle Bill, that passion was for his 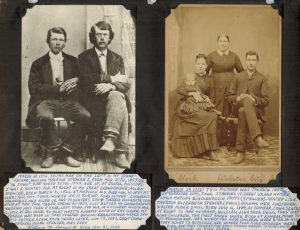 family genealogy. As a young boy, he saw a little black book his mother was working on. It was a simple record book of the family members she knew of at the time, but for Uncle Bill, it was a challenge. He was hooked, and for as long has his memory lasted, Uncle Bill continued digging for more information. His work would take him on many trips to pour through libraries, county records, state records, and to walk miles and miles of cemeteries. He had a need to find out about his past. He found himself feeling annoyed when people didn’t properly mark photos and documents, with important information, such as who was in the picture, when it was taken, and what was going on. So much information is so easily lost because someone didn’t take a moment to properly document a picture. Since I have looked over all his work, I can understand his frustration, because there are pictures that we know the relationship of, but not the name of the person, and some people we don’t know anything about at all. And no way to find out. History lost…maybe forever. 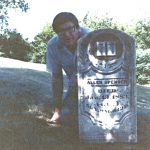 When my girls, Corrie Petersen and Amy Royce were in grade school, they had an assignment concerning their family history. My mom, Collene Spencer said I should get a hold of my Uncle Bill…his reputation as the family historian had preceded him. I called him, and he sent what was needed for their assignments. That was awesome, but it was not the end of the story. With Uncle Bill’s way of peaking my interest, I have picked up the torch and I am running with it. I pray that I can do him proud. Uncle Bill has dementia now, and doesn’t remember that he was working on the family history, Still, I pray that I, and others like me, can carry on his legacy for him, so that history will not be lost in this family. Today is Uncle Bill’s 95th birthday. Happy birthday Uncle Bill!! Have a great day!! We love you!!