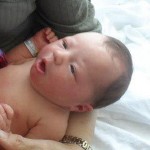 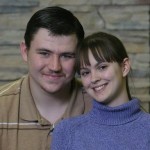 Almost 3 years ago, two very special people got married. Dani and James were both college students at the Frontier School of the Bible in the little town of La Grange, Wyoming. They were two kids, totally in love and setting off on their new life together. Theirs would be a story book romance. They rented a little place, and studied hard, while working to pay their bills. It is a story most young couples can relate to in one aspect or another. Marriage is like that in the beginning…all about living on love and buying on time…as the song goes. This year marks James and Dani’s graduation from college, and the beginning of a new phase in their relationship…parenthood.

It was a bit of a close call, but not in the way you think. Little Natasha Elizabeth waited only eleven days past her parents’ graduation to make her appearance. With babies, you just never know. She could have just as easily arrived before or during the graduation, but it looks like baby Natasha is planning to be an obedient little girl, who doesn’t mess up her parents plans…at least not yet. Natasha Elizabeth Forseen is a beautiful dark haired little girl, who was born at 9:59pm on May 13, 2013. She weighed 7 pounds 2 ounces. She is 20 inches long. She was welcomed by her loving parents, Dani and James, her grandparents, Tim and Liz Byer and Darrel and Julie Forseen, and aunts, Nicki, Belinda, Carrie, and Amy, and several other relatives. Her arrival was a joyous occasion for everyone.

Knowing Natasha’s parents, there are going to be two things in her life that 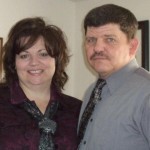 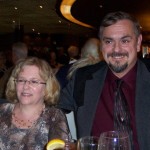 she can count on…not including her family, that is. Natasha will always have faith in a loving God who blessed her with such a wonderful family, and she will always know quite a bit about trains. In fact, if things go as planned, Natasha’s daddy, James will be working for the railroad in the very near future. It has been his second love, after his wife, Dani…but I have a feeling that as of Monday night at about 9:59pm…it slipped to a distant third, behind a beautiful baby girl.