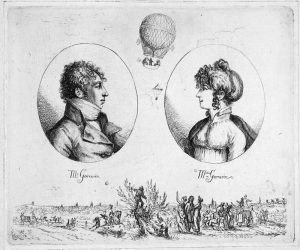 Jumping out of a perfectly good airplane…known by most of us as a parachute jump…is something that the majority of us would probably not do. Still, there are many people that love to jump, and others who would love to try it. I would have thought that this was a rather new hobby, and a even fairly new way to fight fires or fight wars, but I would be wrong. The first parachute jump is said to have taken place in 1797…yes, I said 1797!! How could that be? There weren’t even any planes?

That first parachute jumper was André-Jacques Garnerin from a hydrogen balloon 3,200 feet above Paris. Military jumpers jump at altitudes between 15,000 feet and 35,000 feet…which seems a bit high to me, but what do I know. The lowest altitude to jump is an almost suicidal 100 feet. That put Garnerin’s jump on the low end of the safe spectrum. Garnerin first came up with the idea of using air resistance to slow an individual’s fall from a high altitude while he was a prisoner during the French Revolution. Although he never employed a parachute to escape from the high ramparts of the Hungarian prison where he spent three years, Garnerin never lost interest in the concept of the parachute. He thought that given enough height, he could have escaped from that prison.

After he was released, he continued to experiment with the idea. Then in 1797, he completed his first parachute. The parachute consisted of a canopy 23 feet in diameter, attached to a basket with suspension lines. He was finally ready. On October 22, 1797, Garnerin attached the parachute to a hydrogen balloon and 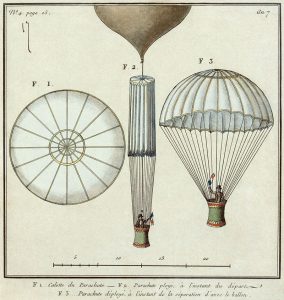 ascended to an altitude of 3,200 feet. He then climbed into the basket and cut the parachute loose from the balloon. To say it was a perfect trial, would be an epic mistake. Garnerin had failed to include an air vent at the top of the prototype, and he oscillated wildly in his descent. Nevertheless, he landed shaken but unhurt half a mile from the balloon’s takeoff site. Unless you are an expert on parachutes, or even an amateur, you probably wouldn’t know about the vent hole. Nevertheless, it is quite important. I would expect that Garnerin’s wife would have been ready to choke him for trying something so crazy, but I would be wrong. In 1799, Garnerin’s wife, Jeanne-Genevieve, became the first female parachutist. I guess he married a woman who was as much an adventurist as he was. They continued on with their work, and in 1802, Garnerin made a spectacular jump from 8,000 feet during an exhibition in England. Unfortunately, he died in a balloon accident on August 18, 1823 while preparing to test a new parachute.