Change Really Is The Only Constant

In years gone by the average person couldn’t afford many books, if any books. All books were hardback, and expensive to purchase. Most people had to make due with checking out a book from the library. taking a book with you to read on a train wasn’t feasible either. They were heavy, large, and bulky. Now, most people wouldn’t think of a waddling, surprised-looking bird would be on the list of working-class heroes…if there is such a thing, but somewhere in the world of books, it is a penguin that changed the lives of many…at that time anyway. The penguin still stares out blankly from the covers of Penguin books published today. Change is constant, and today, many people again don’t won books, because everything is going digital…but that is a story for another day.

The story of Penguin Paperback Books is an interesting one. A man names Allen Lane was at the Exeter Railway Station heading home after having spent the weekend interviewing one Agatha Christie. As he prepared to board his train, he was looking around for something inexpensive to read on the ride home. There was simply nothing 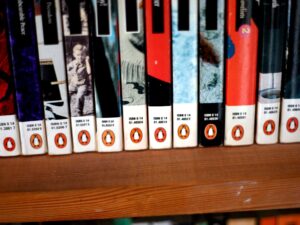 to be found…except reprints of Victorian novels and magazines. Lane was unimpressed, and he decided that the world needed a change. I’m not sure how the publishing companies felt about his plan, but then again, how well could their businesses be faring, if no one could afford their books.

Once he was back in London, Lane decided to set up a company selling contemporary fiction cheaply. He had some ideas, and wanted a logo that was “dignified but flippant.” His secretary suggested a penguin. An employee was dispatched to the London Zoo, sketch pad in had, to draw a penguin. I don’t know if I think a penguin is “dignified,” but the idea seemed to serve the purpose it was intended to, and on July 30, 1935, the first books bearing the

ubiquitous penguin were published. The design was color coded, with orange for fiction, blue for biography, and green for crime. Each book cost sixpence, or $10.00 US. That seems like a lot of money for the time, considering that they sell for about that today, many years later. Still, there was the novelty of it all to consider. Leading the rollout were names like Ernest Hemingway, Andre Marois, and Agatha Christie (who may have inspired the idea in the first place).

Traditional publishers turned up their noses at the popular paperback revolution, but that didn’t stop Penguin selling millions of books to avid readers of A Farewell to Arms and The Mysterious Affair at Styles in its first years. I suppose they thought their sales would be hurt by these “disposable” versions of their great books. I wonder what they would think of the Kindle versions and the Audible versions. I would imagine they would really be cringing, but change really is the only constant.