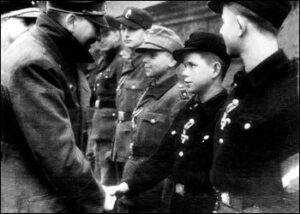 Many people know that April 20th is Hitler’s birthday, not that most of us would celebrate that fact. Nevertheless, for the Allies in World War II, at least on April 20, 1945, that day meant something. Not because it was Hitler’s birthday…no, it was because the Allies had a plan. The Germans had been in control in much of Italy, and their advancement had to be stopped. As always, there were multiple campaigns planned on any given day in the war. One planned attack, called Operation Corncob, was to send Allied bombers into Italy to begin a three-day attack on the bridges over the rivers Adige and Brenta to cut off the German lines of possible retreat on the peninsula. They knew that Hitler would be otherwise occupied, it being his birthday and all…and so he was.

Hitler was actually occupied for more reasons than just his birthday, as Soviet artillery had begun shelling Berlin at 11am on his 56th birthday. Preparations were being made to evacuate Hitler and his staff to Obersalzberg to make a final stand in the Bavarian mountains, but Hitler refused to leave his bunker. So, Hermann Göring and Heinrich Himmler left the bunker for the last time. Operation Herring had begun the day before, with American aircraft dropping Italian paratroopers over Northern Italy, and with Operation Corncob came the other half of the attack, which was to remove the bridges and thereby halt the expected retreat of the German forces. I doubt if Hitler knew anything about these attacks, I’m sure his mind was on his upcoming suicide, a death which some say didn’t really take place, and a fact which we will never know for sure.

The Allied attacks of April 1945 on the Italian front, were intended to end the Italian campaign and the war in Italy, and to decisively break through the German Gothic Line, the defensive line along the Apennines and the River Po plain to the Adriatic Sea and swiftly drive north to occupy Northern Italy and get to the Austrian and Yugoslav borders as quickly as possible. Unfortunately, German strongpoints, as well as bridge, road, levee and dike blasting, and any occasional determined resistance in the Po Valley plain slowed the planned sweep down. Allied planners decided that dropping paratroops into some key areas and locales south of the River Po might help wreak havoc in the German rear area, attack German communications, and vehicle columns, further disrupting the German retreat, and prevent German engineers from blowing up key structures before Allied spearheads could exploit them. Lieutenant General Sir Richard McCreery, commander of the Commonwealth 8th Army, had a number of Italian paratroopers at hand for the task.

Meanwhile, Adolf Hitler celebrated his 56th birthday with a traditional parade and full celebration, while a 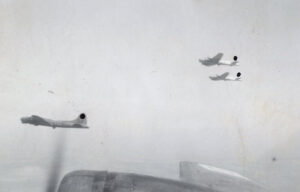 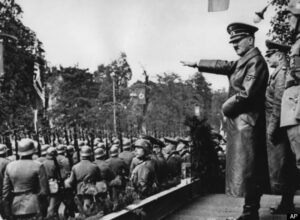 Gestapo reign of terror took the lives by hanging of 20 Russian prisoners of war and 20 Jewish children, at least nine of which were under the age of 12. All of the victims had been taken from Auschwitz to Neuengamme, the place of execution, for the purpose of medical experimentation. Hitler and his Third Reich didn’t fully understand it then, but they were finished, and the end was coming quickly.