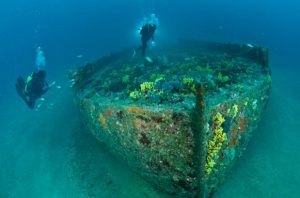 Over the years of shipping and wars on the high seas, the ocean floor has become riddled with ships. They rest on the ocean floors almost like ghosts of the past, but all that is changing. The old wooden boats have most likely rotted away long ago but the metal ships, and those that carried or contained metal, have remained…some, like the World War I ships, for over a hundred years. Nevertheless, time and man have taken their toll on those ships too. Corrosion, sea life, and salvagers have been slowly dismantling these relics, to the point that some are completely gone. It is the natural course, I suppose, but it does seem sad to think that those great battle ships will soon be gone forever. I’m not the only one who feels sadness over that prospect either. As the 100th anniversary of the beginning of World War I rolled around on July 28, 2014, members of the United Nations Educational, Scientific and Cultural Organization (UNESCO) met in Belgium to discuss ways of protecting the valuable underwater cultural heritage of the historic war. The organization plans to extend a 2001 convention in order to safeguard thousands more historic sites, including many World War I shipwrecks that are threatened by salvage operations, looting and other brands of destruction. The 2001 convention originally applied only to sites sunk more than 100 years prior to 2001.

I suppose that to many people, especially salvagers, these under sea relics mean just one thing…money. But to historians…even amateur historians, like me, it is unthinkable to know that those pieces of history have come to nothing more than a way for looters, or salvagers, as they like to call themselves, to make money. It is much like robbing a grave if you ask me. These places truly are an underwater heritage, and while I’m not against recreational divers going in for a look, they should be required to leave it all as they found it…no 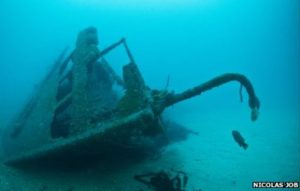 souvenirs. As an avid hiker, I have learned to respect the natural areas I visit, by not stealing from the sites, and not littering either. That way, the next person who visits gets to see the same beautiful sights that I got to see. It should be the same on the ocean floor, and while I don’t see myself visiting any of those historic places, I would like to know that if diving expeditions go there and post videos, it would not be of the leftovers, following a salvage theft.

With technology getting better and better, the locations of many, if not most of the undersea relics are well known, and unfortunately that also leaves them vulnerable to looting. I suppose it will still happen, even with increased regulation against it, but maybe some people would be deterred. That is the goal anyway. According to UNESCO’s Ulrike Guerin, protection under the convention “prevents the pillaging, which is happening on a very large scale, it prevents the commercial exploitation, the scrap metal recovery, and it will have regulations on the incidental impacts, such as the problem of trawlers going over World War I sites.” After so many years underwater, these ships are already fragile. It’s up to us, the people of the world to step up now, and protect them to the best of our ability. We may not be able to protect them from the ravages of the salt water, the sea life, and the years, but we can do our best to protect then from the salvagers, thieves, and looters of the world, who might go to the sight for the sole purpose of their own profit…at the expense of the people of the world.

The UNESCO Convention on the Protection of Underwater Cultural Heritage, introduced in 2001 was designed to help member nations better protect shipwrecks, submerged ruins and other valuable, increasingly fragile, parts 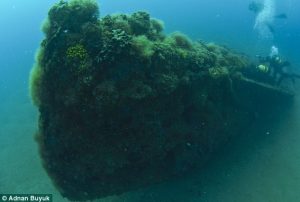 of their underwater heritage. The organization estimates that there are more than 3 million undiscovered shipwrecks scattered over the globe, including more than 12,500 sailing ships and war vessels lost at sea between 1824 and 1962 alone. With improved technology, these wrecks are becoming more accessible all the time, making them vulnerable to treasure hunters, commercial salvage operations and other types of looting…destroying these treasures for their own selfish, greedy gain. In my opinion, their preservation is more than just a good idea…it is our duty, and not only concerning World War I era wrecks, but also World War II era, and many other historic ship wrecks that could be photographed by legitimate expeditions for all to see.