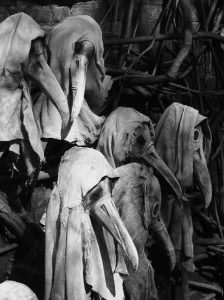 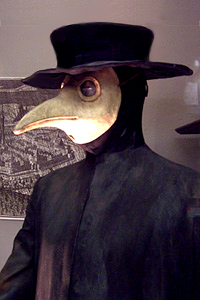 Imagine, waking up from a feverish delirium, to find yourself staring into the face of a doctor who looked like some type of bird, and a scary one at that. When people are delirious and feverish, they are already not in their right mind, so looking at the man, who looked like a giant hawk, could be…well, frightening. The poor sick patient, might have believed that they had been abducted by aliens.

Medicine has come a long way over the centuries. Long ago, physicians in Europe thought that diseases were caused by “bad air.” Scientists like Louis Pasteur, Robert Koch, and Joseph Lister hadn’t yet come up with the scientific proof of the germ theory of disease. Sometimes, it just makes you wonder how anyone managed to survive in those days. Still, the doctors did know that somehow they needed to protect themselves, be it from the “bad air” or germs that they didn’t even know existed. I guess they figured that “when in doubt…protect yourself” first. It was good advise then and good advise now. A healthcare worker, be it doctor, nurse, cna, or caregiver, cannot be of any use to their patient, if they get sick too.

So, to safeguard themselves against miasma, which was the name they gave to this “bad air” and since the doctors then didn’t know about the kinds of gear that is available these days, the doctors donned a curious accessory while treating sickly patients…a mask with a long, bird-like beak, which was stuffed with dried flowers, herbs, and spices. The gear was used during the Carnival of Venice, so some people might recognize it as the “plague doctor” costumes, but they probably wouldn’t know that, with the costumes were an exaggeration, this type of gear was really used during plagues in the 17th century.

It is thought that doctors accepted this type of mask, thanks in part to the Black Death, which ravaged the Middle East, Asia, and Europe during the 14th century, but medical historians say it wasn’t invented until three 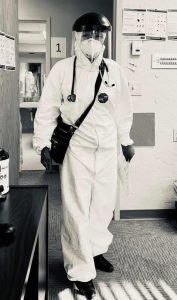 centuries later, when a 16th century French doctor named Charles de Lorme likely designed what could be described as one of history’s earliest hazmat suits during later waves of the plague, and it was very similar to these. I’m sure they did the best they could, but my guess is that is was sorely inadequate. The de Lorme suit consisted of “a full head-to-toe protective garment, modeled after a soldier’s canvas gown which went from the neck to the ankle. The over-clothing garment, as well as leggings, gloves, boots, and a hat, were made of waxed leather. The garment was impregnated with similar fragrant items as the beak mask.”

These days, our healthcare workers, who are working with serious diseases, such as Covid-19, wear gear that is much more capable of protecting them. Healthcare workers like my friend, Nurse Practitioner, Angela Booth might look like they are wearing…well, almost bunkers, like a firefighter wears, with the exception of the heavy oxygen, of course. Still, the gear they are wearing is highly sophisticated and is much better able to protect them from the disease, than gear used to be, and anyone who has friends or family in the healthcare industry, can be thankful for that. For patients, it might still be scary to see the doctor or nurse dressed that way.