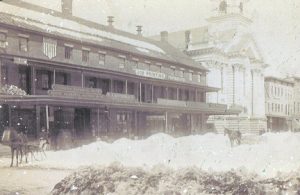 With all of the extreme weather shows, warnings, and education we have access to these days, one would think that blizzard related deaths would quickly become a thing of the past, but it never seems to go that way exactly. Nevertheless, it used to be much worse. In bygone years, the warnings we have today simply didn’t exist, and blizzards were very much feared by the people, and with good reason too. The storms would come up, seemingly without notice, and I suppose that was how it was. People couldn’t turn on their radio, television, computers, or smart phones, and get the weather forecast. They could look at the sky and feel the temperature changing, and maybe guess at what was coming, but if they were wrong, it could be deadly. Such was the case on January 12, 1888, when a blizzard blew into the Northwest Plains region of the United States with little or no warning. Some people said that the temperature dropped 100° in just 24 hours. A lot maybe, but I’ve seen temperature changes of more than 60°, so it’s possible.

It was a Thursday afternoon and the weather had been unseasonably warm the previous day from Montana, east to the Dakotas, and south to Texas. Within a matter of hours, the Artic front blew in, plunging the temperature to 40° below zero in much of North Dakota. The freezing temperatures were joined by high winds and heavy snow. It was lethal combination that created a blinding blizzard, just when the children were on their 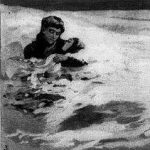 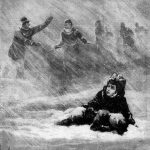 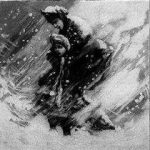 way home from school. The storm, coupled with the time of day, set the stage for a disaster, and unfortunately it would take the lives of 235 people…mostly children making their way home from school in rural areas and adults working on large farms. Both of these groups of people were taken by surprise, and were unable to find their way to their destinations.

Some areas decided to err on the side of caution, and that resulted in lives saved. Schoolteacher, Seymour Dopp in Pawnee City, Nebraska, kept his 17 students at school when the storm began at 2 pm. They stayed overnight, burning stockpiled wood to keep warm. The next day, parents made their way over five foot snow drifts to rescue their children. I’m sure they were wondering if they would ever see their children again, because they couldn’t call to check on them, after all. Some areas ha drifts over ten feet too. In Great Plains, 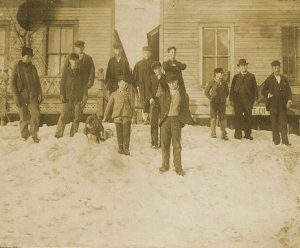 South Dakota, two men rescued the children in a schoolhouse by tying a rope from the school to the nearest shelter to lead them to safety. Minnie Freeman, a Nebraska teacher, successfully led her children to shelter after the storm tore the roof off of her one room schoolhouse. Sadly, not all efforts to save the children were successful. Teacher Loie Royce tried to lead three children to the safety of her home, which was less than 90 yards from their school in Plainfield, Nebraska. They all became lost. The children died of hypothermia, and Royce lost her feet to frostbite. The January 12th storm was dubbed the Schoolchildren’s Blizzard, because most of the 235 victims were children. It is considered one of the worst blizzards in the history of the area, to this day.