When Time Ran Out

Hitler was an insanly, evil ruler, and he hated the Jewish people…that is a known fact. It wasn’t anything they did, it was just his own twisted mind. That said, the Jewish people found themselves hiding in order to save their lives. Anne Frank was one of the most famous of those persecuted Jewish people, most likely because of her diary, which was published by her father following her death at the Bergen-Belsen concentration camp in Germany, and his release following the liberation of the camps. Annelies Marie Frank was born in Frankfurt, Germany, on June 12, 1929. She was the second daughter of Otto Frank and Edith Frank-Hollander, both of Jewish families that had lived in Germany for centuries. With the rise of Nazi leader Adolf Hitler in 1933, Otto moved his family to Amsterdam to escape the escalating Nazi persecution of Jews. In Holland, he ran a successful spice and jam business. Anne attended a Montessori school with other middle-class Dutch children, but with the German invasion of the Netherlands in 1940 she was forced to transfer to a Jewish school. In 1942, Otto began preparing a hiding place in an annex of his warehouse on the Prinsengracht Canal in Amsterdam. It was a wise move, given what was coming. The family moved in on July 15, 1942, when Anne’s sister, Margot received a letter telling her to report to the labor camps in Germany. Knowing what that meant, the family took refuge in the secret hiding place they had prepared. This would be their home for the next 25 months.

Nineteen months earlier, on December 1, 1940, Anne’s father Otto Frank moved the offices of the spice and gelling companies he worked for, Opekta and Pectacon, from an address on Singel canal to Prinsengracht 263. The warehouse on Prinsengracht Canal, where Otto Frank ran his business, was a perfect place to create a safe room for his family, should the need ever arise. On July 15, 1942, the need arose. The ground floor of the building consisted of three sections. The front was the goods and dispatch entrance, basically the storefront. Behind the storefront 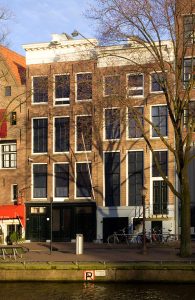 was the middle section where the spice mills were located. At the rear, which was the ground floor of the annex, was the warehouse where the goods were packed for distribution. On the first floor above were the offices of Frank’s employees…Miep Gies, Bep Voskuijl (known in Anne Frank’s diary as Elli) and Johannes Kleiman were in the front office. Victor Kugler in the middle and Otto Frank in the rear office above the warehouse and below the floors which would later hide him and his family for two years until their betrayal to the Nazi authorities. The Achterhuis (Dutch for “back house”) or Secret Annex…as it was called in The Diary of a Young Girl, an English translation of the diary…is the rear extension of the building. It was concealed from view by houses on all four sides of a quadrangle. Its secluded position made it an ideal hiding place for Otto Frank, his wife Edith, two daughters, Margot and Anne, and four other Jews seeking refuge from Nazi persecution. Though the total amount of floor space in the inhabited rooms came to only about 500 square feet, Anne Frank wrote in her diary that it was relatively luxurious compared to other hiding places they had heard about. Those in hiding had been so careful. The entrance to the secret annex was hidden by a hinged bookcase, and former employees of Otto and other Dutch friends delivered them food and supplies procured at high risk. Anne and the others lived in rooms with blacked-out windows, and never flushed the toilet during the day out of fear that their presence would be detected. In June 1944, Anne’s spirits were raised by the Allied landing at Normandy, and she was hopeful that the long-awaited liberation of Holland would soon begin.

The family remained hidden here for two years and one month, praying that the war would end, and Hitler would be defeated before they were found. They stayed there until they were anonymously betrayed to the Nazi authorities by a Dutch informer, arrested, and deported to their deaths in concentration camps. Of the hidden group, only Otto Frank survived the concentration death camps. It was on this day, August 4, 1944, that time ran out for the family and friends in the secret annex. The Nazi Gestapo showed up at the warehouse, 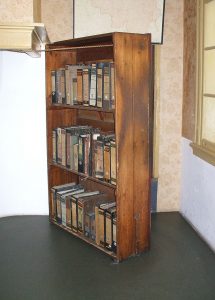 and they knew everything they needed to know about how to find the group of Jews in the secluded hiding place. They went right to the bookcase door and charged into the secret rooms. I can only imagine the terror that followed…the screaming, the running, the fear of knowing what was probably coming next. They were sent to a concentration camp in Holland, and in September Anne and most of the others were shipped to the Auschwitz death camp in Poland. In the fall of 1944, with the Soviet liberation of Poland underway, Anne was moved with her sister Margot to the Bergen-Belsen concentration camp in Germany. Suffering under the deplorable conditions of the camp, the two sisters caught typhus and died in early March 1945. The camp was liberated by the British less than two months later. Otto Frank was the only one of the 10 to survive the Nazi death camps. Two short months…or six short months, if you look at when they were captured. What a waste of a life or lives, and all because of the insanity of one man.

The Choice Is Yours 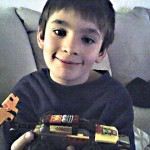 James, it is so hard to believe that yet another of my grand nephews is graduating. It still seems like you should be just a little boy. I know that is crazy, because you and Caalab are the same age, and you are ten days older in fact. The years have flown by so quickly. I remember the day you were born, and every milestone in between that day and graduation. Now you are a man, and we couldn’t be more proud of the man you have become. You are a quiet man much of the time, but the little kids all love being around you so much. Watching you yesterday with Aleesia, and all the fun she was having climbing all over you, and then Raelynn and Audrianna coming in and making a beeline for you. It is so obvious that they all just love you so much. 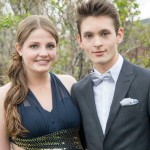 While our minds are able to clearly see all the years that have gone by, and what a cute little boy you were, we find ourselves struggling with the fact that the little boy you were is gone forever now…and in his place is a tall young man, who is ready for the world and the next step in his journey in life. Whether you know exactly where you are headed, or if your plans are still in the works, I know that you will succeed in whatever you decide to do, because you are a person who completes what he starts. Still, today is about a finished race. You have completed all the requirements to receive your high school diploma…the achievement that we take you the longest time among life’s achievements. Before you now stands the next door in your life, and it is up to you to choose where that door will lead. No one else can make the decision for you. Your parents and family can advise you, but the choice is your and yours alone. 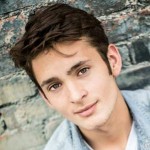 For now, James will attend Casper College, and take the required courses for graduation, since he hasn’t settled on a career path for sure. That’s never a bad idea. Taking all the basic classes leaves you with the ones that really interest you when you know where your career is headed. James is also hoping to save money to take a trip to the Netherlands, where his girlfriend is from. Julia is a foreign exchange student at Kelly Walsh, but will be heading home soon, so he wants to go see her there in her home country. Who knows, maybe he will choose to go to college there. Again, only time will tell, but for now, James is simply looking forward to his graduation, because it is the goal he has worked long and hard for. Congratulations James Renville!! We are very proud of you!! Way to go!!