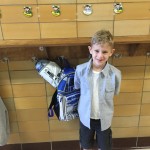 When most kids lose their teeth, they put them under their pillow for the tooth fairy to come and retrieve in exchange for money, but once in a while…things just don’t go as planned. Such was the case for my grandnephew, Ethan Hadlock. Ethan recently lost a tooth, which is perfectly normal, but not with Ethan, who was eating Mini Trix at the time. I’m sure you can guess the rest. Yes, Ethan swallowed the tooth. This is a serious problem for a kid who is expecting a visit from the tooth fairy for that tooth. Nevertheless, Ethan went to bed that night hoping the tooth fairy would understand, and in the morning, he found out that she absolutely did understand. I guess maybe Ethan isn’t the only kid to swallow a tooth…so it stands to reason that the tooth fairy would have a Plan B…just in case, because she simply couldn’t leave a child unpaid for a lost tooth, just because it got swallowed, now could she. Kids have to have a way to make money…right!! 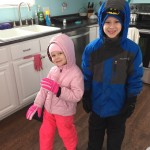 Ethan is in first grade this year, and the change from Kindergarten is amazing. He has really matured, which often happens as kids become seasoned students. Ethan is, of course, a part of the latest Star Wars craze. He loves almost everything about it, but please understand that Clone troopers are way cooler than storm troopers or Jedi. If you don’t know that, you aren’t with it. For Christmas, Ethan got a light Saber and other star wars stuff including star wars monopoly and star wars Disney infinity games. Those should keep him busy for a while. Ethan has taught his little sister Rory to play Monopoly, and they love to play it together. Ethan loves to be the banker, and Rory loves moving her game piece around the board. Ethan is very adept at Legos, and puts together complicated Star Wars sets in about an hour. It would take me hours!!

Ethan loves school, and is doing second grade work in reading and mathmatics. His favorite subjects are math and music. Ethan he has a best friends club at school. I used to love being a part of the clubs in school, both 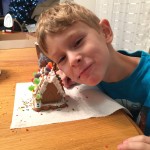 the school oriented ones, and the ones the kids set up themselves. It’s funny that a Best Friends Club is something the kids do nowadays, because this was something my Aunt Evelyn Hushman was a part of, and everyone thought it was so cool then, and really wanted to do it too. Of course, Ethan is not all about school either. He loves to play the guitar, like his dad, Ryan Hadlock does, and like any daddy’s boy, he wants to go duck hunting with his dad. As with any family with more than one male, and sometimes even the females, there must be battles. In the Hadlock household…it’s nerf battles. These battles happen randomly, but there is a battle at least once a month. If you are at the Hadlock house, watch out for flying nerf balls. Today is Ethan’s 7th birthday. Happy birthday Ethan!! Have a great day!! We love you!!