Elegance In A Prairie Town 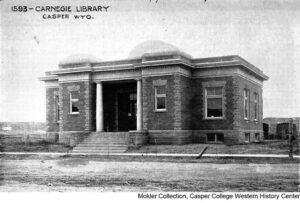 Andrew Carnegie is a name most people have heard of, at least when you think of places like Carnegie Hall, but that isn’t something that has much in common with places like Wyoming…or does it? Andrew Carnegie was born to Margaret Morrison Carnegie and William Carnegie in Dunfermline, Scotland. The family lived in a typical weaver’s cottage with only one main room, consisting of half the ground floor, which was shared with the neighboring weaver’s family. It was here in very humble beginnings that Andrew Carnegie made his debut. When Carnegie was 12, his father had fallen on very hard times as a handloom weaver. To add to the family’s predicament, the country was in starvation. His mother helped support the family by assisting her brother and by selling potted meats at her “sweetie shop,” making her the primary income in the family. The family was struggling to make ends meet and they knew they weren’t going to make it…at least not in Scotland. The Carnegies then decided to borrow money from George Lauder, Sr and move to Allegheny, Pennsylvania, in the United States in 1848 for the prospect of a better life. In September 1848, Carnegie arrived with his family in Allegheny. That was not the end of their struggles, however. Carnegie’s father struggled to sell his product on his own, but eventually father and son both received job offers at the same Scottish-owned cotton mill, Anchor Cotton Mills. At least they had some income, meager as it was.

Young Andrew Carnegie was destined for better things, however. In his adult life, Andrew Carnegie enjoyed success in businesses ranging from oil to railroads to steel, Carnegie became one of the wealthiest Americans of his era. After selling off his businesses and retiring in the early part of the 20th-century, Carnegie spent the remainder of his life giving away much of his enormous wealth. It was this portion of Carnegie’s life that would forever tie him to Casper, Wyoming, and to many other towns across the country. Casper’s connection to one of America’s most generous philanthropists can be found right on the corner of Durbin and Second Street downtown…the Natrona County Public Library.

In an incredible display of generosity, Andrew Carnegie’s library foundation helped build over 1,700 public libraries around the country. As word got out, in 1905, Casper mayor Wilson Kimball wrote to the Carnegie Foundation hoping to secure a grant to start a library in his dusty, rapidly growing town. His letter read, in part, “We have a town here of at the present time about 1,500 population and there is probably not a more cosmopolitan town, of its size, in the United States. A Carnegie Library here would benefit a class that are seldom benefited by such institutions, and would afford a quiet, wholesome and instructive resort of character that are too scarce in these western range towns.” The Carnegie Foundation agreed to gift Casper, Wyoming a $10,000 grant. Land for the library was donated to the cause. The small, yet elegant design for the building ended up coming in over budget. The Carnegie Foundation was a bit frustrated, but with a few concessions from Casper, the foundation agreed to another $3,000 to help finish the project. By 1910 at the edge of town, Casper’s library was completed. The building with its classical design, high quality masonry and three domes stood out in the town. Casper was basically still a prairie, with muddy streets and stick buildings in 1910. 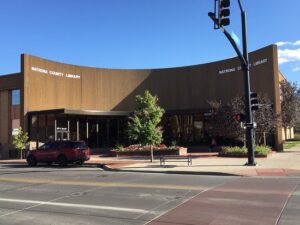 Before long, the library was obviously to small, and in the early 1920s a new design was seamlessly integrated into the original building, adding much needed space for events and collections. After the World Wars, Casper began to grow rapidly, and a prosperous Casper, added a modern addition which opened in 1952. By the late 1960s, the original sections of the Carnegie building had become obsolete and fallen into disrepair. A good portion of the old building had been relegated to storage. Sadly, in 1970, the original building was demolished and the final addition we have today was built. It was the end of the visible Carnegie connection to Casper. In all, Wyoming built a total of 16 Carnegie libraries. Ten remain.