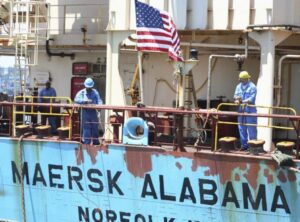 It seems to me that whenever we, as a nation or a people, get a little lackadaisical concerning the safety of our citizens, we find ourselves falling victim to the very thing we thought was no longer a threat. I think most people know that pirates used to be a big problem, but I wonder if people realize that they still are a big problem. We all thought that airplane hijackers were a thing of the past…until 9-11, and then we knew that evil still existed, no matter how tightly we closed our eyes to it.

As far as the United States was concerned, pirates had not captured a ship sailing under the American flag since the 1820s, so why would it happen now? They assumed that our ships were safe…maybe because they flew the American flag or maybe because pirates were really a thing of the past. On April 8, 2009, they found out just how wrong they had been, when the MV Maersk Alabama was hijacked off the coast of Somalia. This hijacking was a very big deal, and drew worldwide attention to the problem of piracy in the waters off the Horn of Africa. Decades of instability in Somalia, as well as a lack of policing in its territorial waters led to a resurgence of piracy in the region that peaked in the late 2000s. Evil simply can not be expected to fade away. In fact, just a day before the attack, the Maersk Alabama received warning from the United States government to stay at least 600 miles off the coast of Somalia. Unfortunately, Captain Richard Phillips decided that keeping the ship about 240 miles from the coast would be sufficient. It was to be a decision that was later criticized by members of his crew, who saw it as reckless. 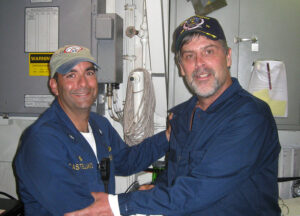 On April 8, members of the crew saw a skiff carrying four armed pirates approaching their ship, Immediately, they initiated the protocol for a hijacking. Chief Engineer Mike Perry got most of the crew to a safe room and managed to swamp the pirates’ craft by swinging his ship’s rudder. Nevertheless, the pirates were able to get onboard and take Phillips hostage. After one of the pirates was injured fighting with the ship’s crew, the remaining three pirates kidnapped Phillips and fled in a lifeboat, planning to use him as a bargaining chip.

The USS Bainbridge arrived early the next morning along with another United States Navy vessel. A three-day standoff followed. The pirates continued to hold Phillips hostage in the lifeboat. Negotiation attempts failed, and at one point the pirates fired at the destroyer, doing no damage. Finally, on April 12, Navy SEAL snipers opened fire on the lifeboat. It must have seemed to Phillips that they had sacrificed his life, to save the ship, but in a stunning display of accuracy, the SEALS firing from a ship’s deck through the windows of the tiny boat, hitting all three pirates in the head, killing them instantly. Phillips was unharmed, and hopefully came away a much 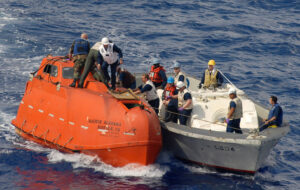 wiser man and a much better captain to his crew.

The surviving pirate, Abduwali Muse, was taken into custody and later sentenced to over 33 years in United States prison, having been tried as an adult, even though he and the other hijackers were reportedly all teenagers when they hijacked the MV Maersk Alabama. Piracy is still an issue in the region…even targeting the MV Maersk Alabama herself four times 2009 and 2011, each of which was repelled by armed security teams. The attacks were attempted, but being ready and willing to fight staved off the attacks.