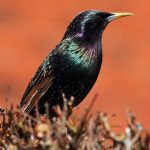 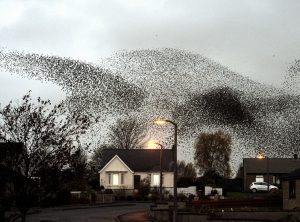 I have always loved watching birds in flight, especially when they are playing as they fly. They swoop, dive, and chase each other across the sky. We used to have pigeons downtown that played like that, but now they have moved near, or rather right over the trail I like to walk on. Since I don’t go downtown much, you can imagine how delighted I am that they have moved. Pigeons, while fun to watch truly have nothing on the Common Starling when it comes to play. The first time I saw a group of starlings in flight, I was stunned. They moved as one, swooping and diving. It looked like a cloud in the sky, but the cloud would have to be alive, which of course, it was, but not in the way you might think. The cloud was the birds, and their dance is beautiful. It was almost surreal, but it was very real.

This group “dance” is actually called a murmuration, and it doesn’t happen every day. Starling murmurations only happen when the birds start to roost…as early as September in some places, and as late as the end of November elsewhere, with more birds joining the nightly displays during this time. Starlings usually perform their aerial acrobatics at dusk, just above their communal roosting sites before they bed down for the night. I suppose it is a joyful display, because they are preparing to have their young. That is not the only reason starlings murmurate, however. Murmuration can also be used as a defense mechanism. The idea for defense is that as a closely packed flock, can appear to it’s enemies as being much larger than any single bird could possibility appear. Grouping together in the sky does offer protection from predators like peregrine falcons, but the birds also murmurate to keep warm and exchange information on feeding sites. It’s like a natural version of social networking, I guess…with the exception of no computer.

The Starling prefers to nest in sheltered spots, away from predators, but that is not always possible. Often they 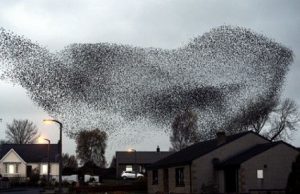 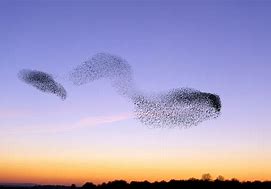 nest in “woodlands, but reedbeds, cliffs, buildings and industrial structures are also used. During the day however, they form daytime roosts at exposed places such as treetops, where the birds have good all-round visibility.” They need to be able to keep a watch to protect themselves from prey. The habits of birds has always been interesting, but the Starling is perhaps the most interesting of all the birds I’ve seen.