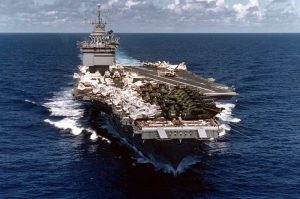 With the development of weapons of mass destruction, comes the distinct possibility of serious accidents. For the most part the weapons are designed to be fairly stable under most circumstances, but that was not always the case, nor is it always the case today. Nitroglycerin, when it was first developed was a volatile liquid that would explode if it was shaken too much. Many miners, hauling the liquid to the mines by wagon, were killed when the nitroglycerin was shaken. In fact it was considered such a hazardous occupation, that the men doing it were given hazard pay, and still not many would haul it.

The same possibility exists with today’s weapons, as was exhibited on 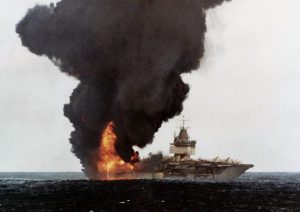 January 14, 1969, on board the USS Enterprise, a United States Naval Aircraft Carrier, while being escorted by the destroyers Benjamin Stoddert and Rogers. On that fateful day a MK-32 Zuni rocket that was loaded on a parked F-4 Phantom exploded when it became overheated due to the exhaust from another plane. The rocket blew up, setting off a chain reaction of explosions. Fires broke out across the deck of the ship, then the jet fuel flowed into the carrier’s interior, and more fires were sparked. Many of the Enterprise’s fire-protection features failed to work properly, but the crew worked heroically and tirelessly to extinguish the fire.

Twenty seven sailors lost their lives due to the tragedy that day, and another 314 men were seriously injured. Although 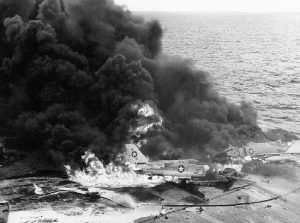 fifteen of the thirty two aircraft onboard the Enterprise at the time were destroyed by explosions and fire, it was determined that the enterprise itself was not in danger of sinking. When compared to previous carrier flight deck fires, the fires on the Enterprise were brought under control relatively quickly. The main repairs were to the flight deck’s armored plating. The ship spent several months at Pearl Harbor Naval Shipyard, Hawaii being repaired and was returned to action on March 1, 1969, when she shipped out to her scheduled western Pacific (WESTPAC) deployment to Vietnam and the Tonkin Gulf. These destinations would be delayed by events in the eastern Sea of Japan.