From That First Moment 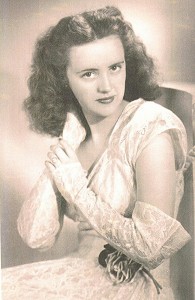 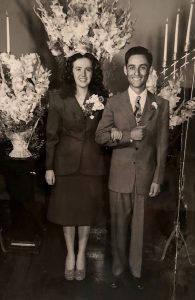 From the moment he first saw her, my future uncle, George Hushman, knew that Evelyn Byer was the girl for him. He was taken by her beauty, and he never had eyes for another…nor did she. Theirs was a match made in Heaven. They married on September 1, 1947, and they would go on to celebrate 67 years of marriage together. Her passing on May 4, 2015 was the saddest day of his life.

Aunt Evelyn and Uncle George decided to build a house for their family soon after their marriage. They, with the help of family members built the iconic house that stood next to the Mills Fire Station ever since. Everyone in town knew the beautiful house. Until Uncle George’s passing, they would be the only family ever to live there. That is a sad thought to me, but some things cannot be helped. A home is meant to be lived in, not held as a shrine to it’s builder.

Aunt Evelyn and Uncle George would be blessed with five beautiful children, Susie Young, George Hushman, Shelley Campbell, Shannon Limmer, and Gregory Hushman. They would also be blessed with grandchildren, 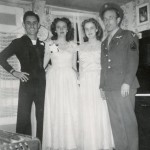 great grandchildren, and great great grandchildren, who are too numerous to name here. I have been blessed to be a niece to my aunt and uncle, as ar so many other nieces and nephews. Aunt Evelyn has always had a generous spirit, and many of us credit her with making our weddings perfect, by making the perfect wedding cake.

For years, Aunt Evelyn and Uncle George bowled as teammates to my parents, Allen and Collene Spencer (Evelyn and Collene being sisters). They had often double dated years ago, so bowling together was a logical next step. When the team decided they didn’t want to bowl any longer, Aunt Evelyn continued on by getting a team of some of her daughters together. I had the pleasure of being a substitute for them, whenever they needed one. We always had a great time. Those were really great days, and I miss them very much. We were 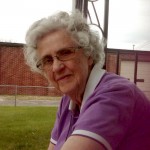 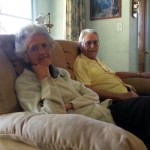 close, and enjoyed each other’s company. There was lots of laughter and fun, every week. Time goes by so quickly, and before we knew it, we were saying goodbye to Aunt Evelyn and then, Uncle George. As it was with my parents, aunts, and uncles before them, we find ourselves losing all the elders in our family, and I find that very sad, because they were in great respect the glue that held us all together. Today would have been Aunt Evelyn’s 91st birthday. Happy birthday in Heaven, Aunt Evelyn. We love and miss you very much. 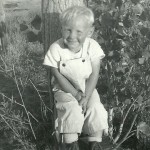 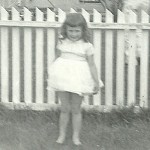