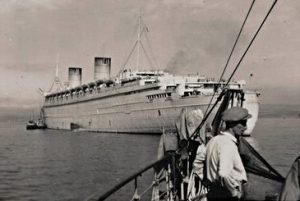 During the world wars, the military commandeered these cruise ships for troop transports, and also for munitions transports. It was not always safe for these ships to be carrying civilian passengers, as was seen with the sinking of the Lusitania, so after a time the cruise ships had to stop their civilian trips and become troop transports exclusively. They had to stop, because whether the ship had munitions on it or not, it was sunk with civilian passengers onboard.

At a time when there were no passenger planes, ocean liners provided the only pathway to cross the oceans. Once war in Europe had begun, many of the great ocean liners of the period withdrew from transatlantic crossings. However, they still remained at sea. Wartime saw ocean liners converted into troopships, carrying thousands of soldiers on a single trip, from bases in the United States to bases in the theaters in Europe, Africa, and Japan. Some of the most famous names in steamship history, including Mauretania, Olympic, Leviathan, 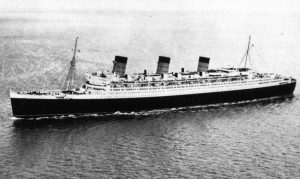 Nieuw Amsterdam (II), Queen Mary and Queen Elizabeth II were among those converted to troopships during times of war. These ships were a critical part of military operations. Without their support, transporting troops, equipment, and munitions would have taken far too long to do any good. These ships were the fastest ships out there at that time in history, and time was of the essence.

Of course, these ships faced the threat of submarine or airborne attack, so speed was the greatest defense the ship could have, but they couldn’t just start using the ships. These ships had to go through a process of preparation before they could be a transport ship. All of the items that were not needed for sustaining or berthing the maximum number of troops, were among the first things to go. Furniture, paintings, pianos, and everything else not needed for war would be removed and stored on land, to be returned to the ship after the war was over. The empty space was then filled with hammocks and cots for the soldiers to sleep on. They mounted guns on the decks to provide defensive capability. Of course, these liners could not act as a warship. They were just not designed for that, but a few well placed shots, might deter some of the smaller boats like U-boats from making a surface attack.

Camouflage was considered a critical part of the liners ability to survive in hostile waters. They applied “dazzle paint” to the hulls of these ocean liners. Oddly, the paint closely resembling zebra stripes!! They reasoned that alternating dark and light stripes would obscure the size, speed, heading, and type of ship when viewed from a distance. I can’t picture that exactly, and apparently it wasn’t very effective either. I guess all that it really did 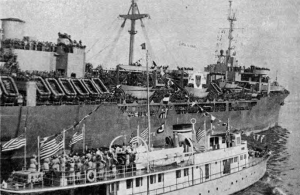 was to give a false sense of security to the soldiers on board.

Following the war, and ship that survived their wartime duties was restored to its former look and feel so that it could continue with its pre-war duties. Unfortunately, many of these beautiful ocean liners were lost to enemy fire during the war. Sadly, there are no real examples of these wartime liners turned troop transports, but the Queen Mary is in dry dock in Long Beach, California. Visitors can take a tour, and get a real feel for those cramped quarters. Visitors can imagine the soldiers felt as they crossed the North Atlantic, knowing that their ship was a prized target for the enemy.