A Box Of Marbles 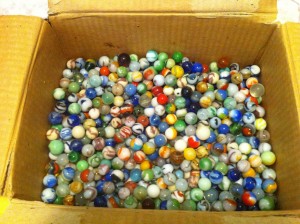 Kids these days don’t play the same games that kids of the past played. That is not such an unusual thing, because the times change, but it is sad to think that the kids today don’t know how to play games like Kick the Can, Red Rover, Jacks, or Marbles. When I was a kid, boys and girls alike played marbles, but there was a time, when marbles was pretty much considered a game for boys. Girls were supposed to be playing more ladylike games.

The little boy, who was my father-in-law, lived in such times, and he couldn’t wait to play marbles like the other boys around him. Then, one day, when he was in second grade, he found himself in possession of one marble. Now, it was a bit of a risky move to join in a game of marbles when you had just one marble, because if you lost it, you were done. Still, what good was one marble if you kept it in your pocket and never took a chance to win more. The thought of being afraid to play…well, it just never occurred to little Walt.

He got himself into the first game he came across, and played his little heart out. He didn’t lose the first marble he ever had, and began winning right away. I can just imagine how proud he was when he showed his mom his take that first day. And winning that first marble, probably got him immediately addicted to the game. I can picture him practicing at home, all by himself, so that he could get better and better at the game that he loved so much. And, get better, he most certainly did. Before long, he was the winningest marble player in the area, and by the time he got to be too old to play such kid games anymore, 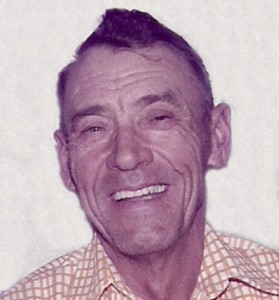 he had won a good sized box of marbles. So many in fact, there was no way he could possibly take all of them to each match he played.

That little boy is gone now, as is the man who is my father-in-law, but his legend lives on, in his little brothers. While in town, for the funeral of his brother, Uncle Butch asked us about the box of marbles. None of us knew anything about it, as he had never mentioned it to us. As we went through the house, going through his things, we assumed that the box os marbles must have, long since, been given away…until yesterday, when we came across them again. They were in the same old box that had once held a lunch pail, safely tucked on the top shelve of the closet, because even though the little boy had outgrown the game of marbles, the little boy still lived in the memory files of the man who became my father-in-law.