A Miracle For Joshua 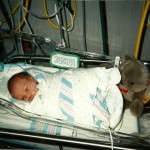 When my oldest daughter was pregnant with her younger son, Joshua David, she had been given a due date of October 15th. That September, Bob and I were going to Denver for a Rockies Baseball game. I told Corrie that she was not to have this baby while I was gone, as I had been at the births of my other three grandchildren, and didn’t want to miss this one. I didn’t exactly expect Josh to come while we were gone, but I did have a sense of unease. Our trip to Denver was going along just fine, when Corrie called to tell us that she was in labor, and that they were trying to stop the labor. If Josh came at that time, he would be 5 weeks early. Some babies do ok that early, while others have problems.

Of course, my first thought was that she was kidding me, since I had told her that she was not to do this, but it quickly became evident that she was serious. I asked how much time we had, since it is a 5 hour drive home from Denver. She said that they were trying to stop the labor, and to wait just a little bit. We waited anxiously for the call to come that would tell us whether or not to race home. The decision was finally made to go home, as the labor would not stop. We headed out about 4:oo am and I was on pins and needles all the way, not to mention praying constantly.

I could not be on the phone with her constantly and that tore me up. It is hard to watch your daughter go through labor and birth, but far worse to have such a premature labor and you are 5 hours away. Every mile was excruciating. We did make it before Josh’s arrival, but not by much. I was so thankful. God saw to it that we got home safe and in time.

Joshua David arrived at 11:57 am on September 9, 1998, he weighed a pretty good 5 pounds 6.5 ounces, but plans were quickly made for him to be flown to Denver. His lungs were immature and he needed help with his breathing. It was decided that Kevin should accompany him on the flight. It was one of the hardest things the kids have ever done. Corrie was a wreck because she wanted to go, and Kevin was a wreck because she couldn’t. We assured them both we would bring her to Denver as soon as she was released.

Josh was placed in the Neo-Natal ICU at Presbyterian St Luke’s Hospital. His weight dropped to 4 pounds 3 ounces. Sometimes, as was the case for the kids, they had an available room on the nursing home side of the hospital where Corrie and Kevin could stay. The nice thing about that was that the kids could go over and see Josh, 24/7, and that is comforting to a parent. Josh was monitored constantly, and given superior care, for which we are eternally grateful to the staff. His 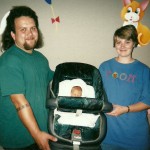 weight began coming back up, but as they got close to coming home, he had a couple of Brady’s, which is when the heart skips a beat. It is normal for that to happen, even in healthy adults, but they won’t let the baby go home until it has been more that 24 hours, so they had to stay longer.

Finally the day came when Joshua David got to come home. We were so excited. His lungs had taken 2 weeks to mature, and he was healthy enough to come home. It didn’t take him long to make up for lost time once he got home. He quickly gained weight and grew into a wonderful little boy. We are so very blessed. God had provided a miracle for Joshua!! We love you Josh!! Happy birthday!!