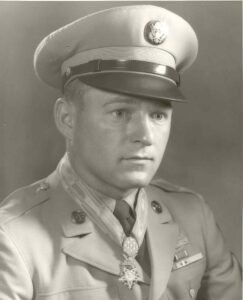 What makes a Medal of Honor winner? I don’t mean what act actually earns them the medal, but rather what causes them to get to that point and beyond. The Medal of Honor is the United States government’s highest and most prestigious military decoration that may be awarded to recognize American soldiers, sailors, marines, airmen, Space Force guardians, and coast guardsmen who have distinguished themselves by acts of valor…or great courage in the face of danger, especially in battle. I seriously doubt if the winner gave any thought to what he had to do to win the medal…there is just no time, and people don’t perform heroic acts just for the medal. It’s bigger than that.

One man, Corporal Ronald Rosser, earned his Medal of Honor while serving in the 38th Regiment of the 2nd Infantry Division during the Korean War. Rosser enlisted in Army at the age of 17 and served from 1946 until 1949. His tour was finished, and he went home, but then his younger brother was killed in Korea in February of 1951. Rosser was devastated, but instead of wallowing in grief, he chose to honor his brother. Rosser re-enlisted to “finish his [brother’s] tour” of duty. Revenge was the only thing he could do for his brother now, and Rosser wanted revenge. In January of 1952, Rosser was a part of the regiment’s L Company. L Company was dispatched to capture an enemy-occupied hill. The battle there was fierce and enemy resistance caused heavy casualties. L Company was reduced to just 35 men from the initial 170 sent out, but they were ordered to make one more 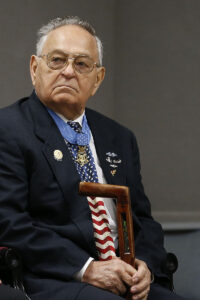 attempt to take the hill. Orders are orders, and as I said, the men didn’t really have time to think about how they could prove their courage. Rosser rallied the remaining men and charged the hill. Enemy fire continued to be heavy, but Rosser attacked the enemy position three times, killing 13 enemy soldiers, and although wounded himself, carried several men to safety. It truly was a courageous act, and one worthy of the Medal of Honor, but not one that Rosser had planned in any way. He just knew that he needed to save as many lives as he could, because he couldn’t live with himself if he didn’t. On June 27, 1952, Rosser was awarded the Medal of Honor by President Harry Truman at the White House for his heroism. On September 20, 1966, another of Rosser’s brothers, PFC Gary Edward Rosser, USMC, was killed in action, this time in the Vietnam War. Rosser requested a combat assignment in Vietnam but was rejected and subsequently retired from the army soon after. Rosser married Sandra Kay (nee Smith) Rosser who died November 28, 2014. He was the father of Pamela (nee Rosser) Lovell. Rosser died on August 26, 2020, in Bumpus Mills, Tennessee at the age of 90.