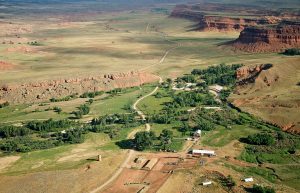 Tucked away in a sleepy area of Wyoming, lies an Old West outlaw hideout. It is located in a remote pass in the Big Horn Mountains of Johnson County, Wyoming. It’s called Hole-In-The-Wall, and in reality, it is anything, but a hole in a wall. The nearest town is Kaycee, Wyoming, population of 274. It is 24.9 miles away, but it will take you 53 minutes to get there by car.

The hideout gets its name from the fact that there is a large break in an otherwise full wall of red sandstone. I suppose you could call it a hole in the wall, but it’s rather large to be called a hole. When I think of a hole in a wall, I picture a small hole…man-sized where a person could sneak in, and possibly even hide the hole with a tumbleweed, but that is not it at all. The remoteness of the area, and the wall made it almost impossible for lawmen to get to the hideout without being seen. The hideout was used 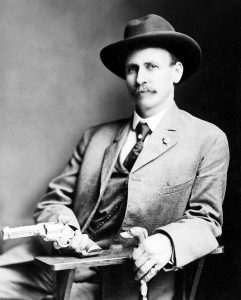 The lawmen tried a number of way to learn more about the site, including the one Pinkerton National Detective Agency detective, Charlie Siringo wrote about, “I started for the Big Horn Basin in the vicinity of the Hole-in-the-Wall in northern Wyoming. I had received instructions from Assistant Superintendent Curran to go up there and get in with the friends of the ‘Wild Bunch’, and learn their secrets.” He like so many more was unsuccessful. No lawmen ever successfully entered the Hole-In-The-Wall to capture outlaws during its more than fifty years of active existence, nor were any lawmen attempting to infiltrate it by use of undercover techniques successful.

The area was remote and secluded, easily defended because of its narrow passes, and impossible for lawmen to 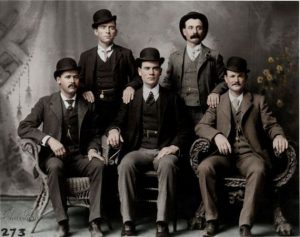 approach without alerting the outlaws. From the late 1860s to around 1910, the pass was used frequently by numerous outlaw gangs. At its height, it featured several cabins that gangs used to lie up during the harsh Wyoming winters, and it had a livery stable, corral, livestock, and supplies, with each gang contributing to the upkeep of the site. While several gangs were there at any given time, they were able to keep their plans and schemes to their own gang. I suppose the was some honor among thieves after all. Eventually, the use of this site faded into history, with gangs using it less frequently. Of course, now it is just another historic site, but some of the buildings are still there.