My Uncle Larry Byer was talented in music. He played the guitar, the mandolin, and the piano. My grandfather, his dad, George Byer played the mandolin and the violin. My dad, Al Spencer and my Uncle George both played guitar. They had a regular band, and their jam sessions were like a big party at the Byer house. The kids all had friends who came over as much as they could to listen to the concerts. There were others that joined in sometimes playing the instruments they knew too. It made for a great Saturday night hot spot. Uncle Larry, Grandpa, my dad, and Uncle George are all in Heaven now, and I’ll bet they are all still having those jam sessions, and enjoying the fun times. A Heavenly Band is always in demand.

Uncle Larry was also a funny guy. He loved a good joke, as well as pulling a few pranks now and then. You never knew what he might do, and that was part of his charm. Together with my mom, Collene Spencer and my Uncle Wayne Byer, there was never a dull moment. What one didn’t think of another did. They were truly like the Three Musketeers!! My grandma, Hattie Byer was often forced to give them an “attitude adjustment” to straighten them out. All in all, they were good kids though…just mischievous.

When he grew up, Uncle Larry served in the United States Army, in the Korean War. While fighting a war would b the pits, my guess is that Uncle Larry took his famous humor with him, and was probably a great asset to the morale of the troops. In fighting a war, it helps to have a little humor. I helps the soldiers to let off steam. War is an ugly event, and sometimes a good laugh is very much needed. In those cases, Uncle Larry would have been the man for the job, in my opinion. Still, Uncle Larry could be serious when it was required of him, and he was a great soldier too. He served his country honorably, and when he was honorably discharged, he came 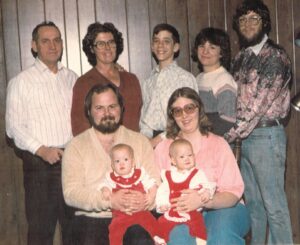 home and rekindled a friendship with his future wife, Jeanette Morton, who had been a family friend for years. They married on February 11, 1956. Their son Larry Wayne Byer was born a year later on February 9, 1957, and daughter Tina followed on November 12, 1958. Their family was complete…until the grandchildren came along that is. Uncle Larry left us for his Heavenly home on December 22, 2011. Today he would have been 87 years old. Happy birthday in Heaven, Uncle Larry. Strike up the band and have a great party. We love and miss you very much.