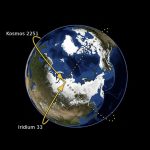 When we think of space, we picture things floating slowly and peacefully along…or at least I do, but the reality is that most things in space are moving quite fast, and along a specific trajectory. While it seems quite chaotic when you think about all the things that are floating around out there, for the most part, it all moves along in a completely organized manner…for the most part.

For things in space to change course, there must be something that interferes with the trajectory…a planet that gets in the way, a new piece of space junk that crosses its path, or a satellite that is falling out of orbit. Even with as much “stuff” as exists in space, these are not common occurrences…or at least not as common as you might think. Nevertheless, on February 10, 2009, two communications satellites…the active commercial Iridium 33 and the derelict Russian military Kosmos-2251…accidentally collided at a speed of 26,000 miles per hour and an altitude of 490 miles above the Taymyr Peninsula in Siberia. That speed puts the collision in the hypervelocity category…in fact, very much so. Hypervelocity is very high velocity, listed as 6,700 miles per hour, or more. At 26,000 miles per hour, this collision more than qualified. That kind of speed is shocking…at least in my mind, and the collision must have been horrific. While there had been other collisions in space, this was the first time a hypervelocity collision occurred between two satellites. Prior to that, all accidental hypervelocity collisions had involved a satellite and a piece of space debris.

The collision occurred at 16:56 UTC, which is the time standard commonly used across the world. The world’s timing centers have agreed to keep their time scales closely synchronized, therefore the name Coordinated Universal Time. The collision destroyed both the Iridium 33 and Kosmos-2251. The Iridium satellite was operational at the time of the collision. Kosmos-2251 had gone out of service in 1995. Kosmos-2251 had no propulsion system, and was no longer actively controlled. Had it been actively controlled, they might have guided it out of harm’s way. NASA initially estimated the debris at 1,000 pieces larger than 3.9, and many smaller pieces, but in reality the US Space Surveillance Network had cataloged 2,000 large pieces by July 2011. They thought the International Space Station, which orbits at about 270 miles below the collision course, was safe, but one piece came within 130 yards at one time, making for a tense few hours.

In the days following the first reports of the incident in 2009, a number of reports of phenomena in the US states of Texas, Kentucky, and New Mexico were attributed to debris from the collision. NASA and the United States Strategic Command, which tracks satellites and orbital debris, did not announce that any debris had

entered the atmosphere at the time and reported that these phenomena were unrelated to the collision. Still, things like sonic booms heard by witnesses in Kentucky, on February 13, 2009 made no sense in any other scenario. Then, the National Weather Service issued an information statement alerting residents of sonic booms due to the falling satellite debris. The Federal Aviation Administration also released a notice warning pilots of the re-entering debris. However, some reports include details that point to these phenomena being caused by a meteoroid shower rather than debris. A very bright meteor over Texas on February 15, 2009, was mistaken for re-entering debris. By December 2011, many pieces of the debris were in an observable orbital decay, moving towards Earth, and were expected to burn up in the atmosphere within one to two years. By January 2014, 24% of the known debris orbits had actually decayed. In 2016, Space News listed the collision as the second biggest fragmentation event in history, with Kosmos-2251 and Iridium 33 producing respectively 1,668 and 628 pieces of cataloged debris, of which 1,141 and 364 pieces of tracked debris remain in orbit as of January 2016.

Contrary to what was expected, a small piece of Kosmos-2251 satellite debris safely passed by the International Space Station at 2:38 am EDT, Saturday, March 24, 2012, at a distance of just 130 yards. As a precaution, ISS management had the six crew members on board the orbiting complex take refuge inside the two docked Soyuz rendezvous spacecraft until the debris had passed. It was a tense time…not knowing if the debris would hit them or miss them. It is not unusual to see two satellites approach within several miles of each other. In fact, these events occur numerous times each day. It’s a challenge to sort through the large number of potential collisions to identify those that are of higher risk. Precise, up-to-date information regarding current satellite positions is difficult to obtain. In fact, the calculations made by CelesTrak had expected these two satellites to miss by 1,916 feet…not a huge distance, but had it been right, it would have been enough.

Planning an avoidance maneuver with due consideration of the risk, the fuel consumption required for the maneuver, and its effects on the satellite’s normal functioning can also be challenging. John Campbell of Iridium spoke at a June 2007 forum discussing these tradeoffs and the difficulty of handling all the notifications they were getting regarding close approaches, which numbered 400 per week for approaches within three miles for 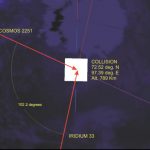 the entire Iridium constellation. He estimated the risk of collision per conjunction as one in 50 million…oops!! That was just a little bit off.

This collision and numerous near-misses have renewed calls for mandatory disposal of defunct satellites by deorbiting them, or at the very least, sending them to a graveyard orbit, but no such international law exists at this time. Nevertheless, some countries have adopted such a law domestically, such as France in December 2010. The United States Federal Communications Commission requires all geostationary satellites launched after March 18, 2002, to commit to moving to a graveyard orbit at the end of their operational life. It’s a start.