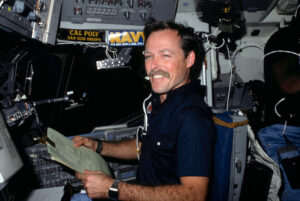 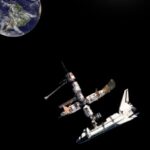 Our space program has gone through many changes over the years. There have been accidents, losses, victories, and amazing strides in both exploration and the vehicles we use to take these trips. One of the biggest goals was to have a space station so that men and women could live and work in space indefinitely…or at least for long periods of time. On June 29, 1995, the American space shuttle Atlantis docked with the Russian space station Mir. This docking formed the largest man-made satellite ever to orbit the Earth…at that time, anyway. We all know that records are meant to be broken.

For a number of years, Russia and the United States had been rivals when it came to the Space Race…as well as many other things, so this joint venture was a really big deal. It was not only about the two rivals working in cooperation together, but it was also the 100th human space mission in American history. It was such a big deal, in fact, that Daniel Goldin, chief of the National Aeronautics and Space Administration (NASA), called it the beginning of “a new era of friendship and cooperation” between the United States and Russia. The docking was also a big deal to people everywhere, with millions of viewers watching on television, Atlantis blasted off from NASA’s Kennedy Space Center in eastern Florida on June 27, 1995.

Just after 6am on June 29, the very excited seven-member crew prepared Atlantis for docking with Mir, as both crafts orbited the Earth some 245 miles above Central Asia, near the Russian-Mongolian border. The moment they spotted the shuttle, the three cosmonauts on Mir began to broadcast Russian folk songs to Atlantis to welcome them. The party was about to begin. Over the next two hours, the shuttle’s commander, Robert “Hoot” Gibson expertly maneuvered his craft towards the space station. This was no easy task. In order to make the docking, Gibson had to steer the 100-ton shuttle to within three inches of Mir at a closing rate of no more than one foot every 10 seconds. Now, I don’t know how fast that would be in miles per hour measurement, but I think these crafts could certainly be damaged by the impact. Precision was key.

Well, the docking went perfectly that day, and by 8am it was completed, and just two seconds off the targeted arrival time, while using 200 pounds less fuel than had been anticipated. Now, that’s what I call success. When docked, Atlantis and the 123-ton Mir formed the largest spacecraft ever in orbit at that time. It was only the second time ships from two countries had linked up in space; the first was in June 1975, when an American Apollo capsule and a Soviet Soyuz spacecraft briefly joined in orbit.

Once the docking was completed, Gibson and Mir’s commander, Vladimir Dezhurov, greeted each other by clasping hands in a victorious celebration of the historic moment. A formal exchange of gifts followed, with the Atlantis crew bringing chocolate, fruit, and flowers and the Mir cosmonauts offering traditional Russian welcoming gifts of bread and salt. After the party, Atlantis remained docked with Mir for five days before returning to Earth. They left two fresh Russian cosmonauts behind on the space station and took the three veteran Mir crew members home in the shuttle. The returning crew members included two Russians and 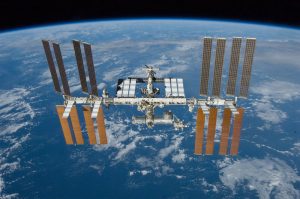 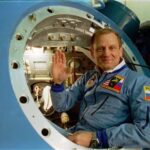 Norman Thagard, a US astronaut who rode a Russian rocket to the space station in mid-March 1995 and spent over 100 days in space. This was a United States endurance record…at that time, anyway. This was a great alliance, especially between two former rivals. NASA’s Shuttle-Mir program continued for 11 missions and was a crucial step towards the construction of the International Space Station, which is now in orbit, and is the current largest space craft. 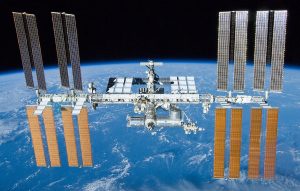 On mornings when I wake up with a backache, the idea of sleeping in a zero gravity chamber sounds appealing, but in reality, living in a zero gravity environment is probably not something I would want to do for very long. While I admit, gravity can put a strain on our bodies in many ways, I don’t think we were really designed to live our whole life without gravity. Nevertheless, living and working in space have become more commonplace than many of us realize. We don’t give much thought to the men and women who live and work in the International Space Station, or in the various crafts that have transported them there over the years.

It was on November 2, 2000, that the first residential crew would arrive aboard the International Space Station (ISS). The arrival of Expedition 1 was the mark of the beginning of a new era of international cooperation in space and of the longest continuous human habitation in low Earth orbit…and it continues to this day…even without the Space Shuttle’s operation…though I don’t think it is as easy to work out the logistics without the Space Shuttle. Two Russians, Yuri Gidzenko and Sergei Krikalev, accompanied by NASA’s Bill Shepherd, were selected as the crew of Expedition 1.

It was decided that we needed an International Space Station in 1998, and the space agencies of the United States, Russia, Canada, Japan and Europe agreed to cooperate to bring it to pass. Its first components were launched into orbit later that year. In all, there would be five space shuttle flights and two unmanned Russian flights to complete the delivery of many of its core components and partially assemble the space station. It was 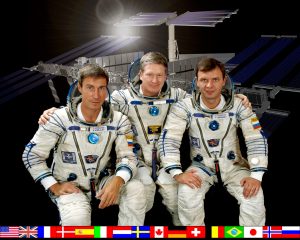 a huge project that would possibly accomplish in space, what we had never been able to accomplish on Earth…nations working together on experiments that mattered to all of them to bring about changes in key areas like health, agriculture, energy, and a host of other things. The ISS was truly a first.

The two cosmonauts and the astronaut arrived at the ISS on a Russian Soyuz rocket that had been launched from Kazakhstan. This first mission was tasked mostly with constructing and installing various components and activating others. This was sometimes easier said than done, and in fact, the crew reported that it took over a day to activate one of the station’s food warmers. I hope they weren’t too hungry!! Throughout their time in space, they were visited and resupplied by two unmanned Russian rockets and three space shuttle missions, one of which brought the photovoltaic arrays, giant solar panels, which provide most of the station’s power.

Shepherd, Gidzenko and Krikalev became the first humans to adjust to long-term life in low orbit, circling the Earth roughly 15.5 times a day and exercising at least two hours a day in order to offset the muscle atrophy that occurs in low gravity. This is where I thought relief of backaches for sleeping wrong might have been solved, but it turns out that there were a host of other problems that come for long-term weightlessness. Who knew? Things like lessened bone density, and pain in joints upon returning to Earth. Hmmm, I guess I’ll sleep here on Earth in gravity, and take Excedrin as needed. 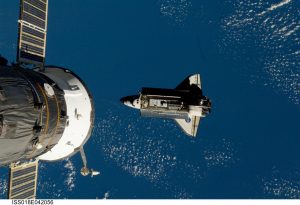 Finally, on March 10, four months after they arrived at the ISS, the space shuttle Discovery brought three new residents to relieve Expedition 1, who landed back on Earth at the Kennedy Space Center on March 21. Since then, humans have continuously resided on the ISS, with plans to continue until at least 2030. 236 people from 18 nations have visited the station and a number of new modules have been added, many for the purpose of research into biology, material sciences, the feasibility of further human space travel and more. Some tams have been there longer than other teams, but all of them have made great contributions to science during their time on the ISS. 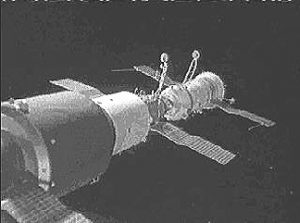 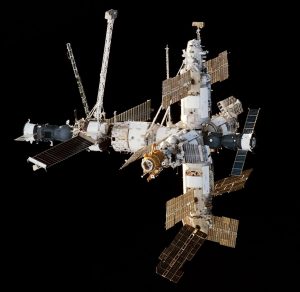