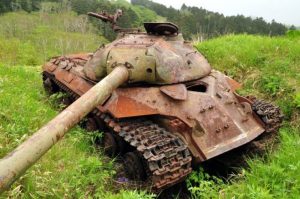 War machines…the weapons of war…everything from tanks to airplanes to ships. A war cannot be fought without the equipment that transports, shoots, bombs, floats, and flies over the war. What happens to the shattered remains of the equipment that didn’t make it back to base? Obviously, if a ship is hit, it ends up at the bottom of the ocean, as does a submarine, but what of the planes, tanks, jeeps, and even the bases that have been bombed out, shot up, or otherwise rendered useless? The world is littered with the wreckage of the many wars that have taken place over the years of human existence, because humans have a propensity for fighting. We don’t like when things don’t go our way, and if we don’t understand that we can’t always have it our way, we tend to go to war.

On an island in the North Pacific, lies a remote island called Shikotan, at the southern end of the Kuril archipelago. The island seems like a simple place, green and lush in the summertime, but the island hides a secret. It has one particularly astonishing characteristic. The island is dotted with the decaying hulks of Russian

military tanks from the 1950s. And these rusting relics hint at the troubled past…and present of Shikotan. Shikotan is a part of an ongoing battle for ownership between Russia and Japan.

Shikotan is part of the Kuril archipelago, a chain of islands stretching from the southeastern tip of Russia to the north of the Japanese island of Hokkaido. The Pacific lies on one side of the Kuril Islands, with the Sea of Okhotsk found on the other. Its location makes it an important island to both countries, hence the battle. After World War II, the San Francisco Peace Treaty, which was signed between the Allies and Japan in 1951, stated that Japan must give up “all right, title and claim to the Kuril Islands.” Unfortunately, it didn’t specifically recognize the Soviet Union’s sovereignty over them. That allowed the dispute that has ensued. Japan claims that at least some of the disputed islands are not a part of the Kuril Islands, and thus are not covered by the treaty. Russia maintains that the Soviet Union’s sovereignty over the islands was recognized in post-war agreements. 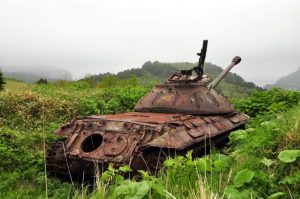 Since that time, Japan and the Soviet Union had been fighting over the island. They finally ended their formal state of war with the Soviet–Japanese Joint Declaration of 1956, but did not resolve the territorial dispute. During talks leading to the joint declaration, the Soviet Union offered Japan the two smaller islands of Shikotan and the Habomai Islands in exchange for Japan renouncing all claims to the two bigger islands of Iturup and Kunashir, but Japan refused the offer after pressure from the US. Japan did not really intend to give up the island, and no one really knows how strong their army there was, but what is left on the island are the remnants of that army…a few masterpieces of Soviet engineering, IS-2 and IS-3 tanks.