Outsmarted By The Patriots 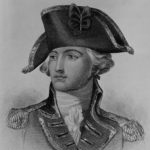 Few people think about the American Revolutionary War any more, because it was so long ago, and we have been an independent nation for so long now, that is almost seems unimportant, but nothing could be further from the truth. The strategies used then, were among the most amazing ever, when you consider the times, and the weapons available to these armies. Just moving the cannon from one place to another was a huge undertaking. Each one weighed upwards of 4500 pounds. The cannon was a major weapon, and was truly necessary if the army was to have a chance of winning a battle. Guns didn’t shoot far enough to have much safety from enemy fire. Getting close enough to successfully fight the enemy meant putting the troops at great risk, during a time when medical assistance was not readily available.

For the English, fighting on American soil was hazardous anyway. They had the disadvantage of not knowing the terrain well, so hiding places were much more well known to the Americans. The British were at a serious

disadvantage. Then, on January 28, 1777, John Burgoyne, a poet, playwright, and British general, submitted a plan to isolate New England from the other colonies, which took in modern day New Hampshire, Massachusetts, Rhode Island and Connecticut. That area might not have been a really big area, as territories go, but it was a big undertaking for any army. Nevertheless, it was the plan that the British decided to use. Burgoyne’s plan called for 8,000 British troops from Canada to move southward through New York by way of Lake Champlain and the Mohawk River. He planned to take the Americans by surprise. General Burgoyne thought he and his troops could take control of the Hudson River and isolate New England from the other colonies.

In his plan, the isolation of New England was designed to free British General William Howe to attack Philadelphia. Unfortunately, while the plan seemed to be working, Burgoyne miscalculated the part distance would play on his plan. His supply line was stretched in a long, narrow strip from the northern tip of Lake Champlain south to 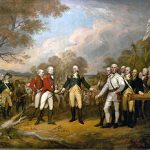 the northern curve of the Hudson River at Fort Edward, New York. As Burgoyne’s army marched south, the Patriot militia was circling north. They cut off the British supply line. What had begun as a major victory, ended up as a defeat in Bennington, Vermont, and bloody draws at Bemis Heights, New York. On October 17, 1777, a frustrated Burgoyne was forced to retreat 10 miles and finally surrendered his remaining 6,000 British forces to the Patriots at Saratoga. France, upon hearing of the Patriot victory, agreed to recognize the independence of the United States. With France’s support, the Patriots took the ultimate victory. Following the defeat at Saratoga General Burgoyne returned home in shame and defeat. He was severely criticized and soon retired from active service.