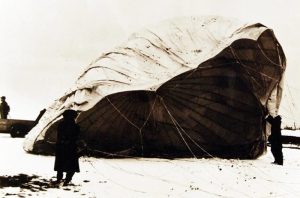 Thermopolis, Wyoming…a favorite destination for my husband and me. We take a trip there every year for our anniversary. I suppose that for many people, Thermopolis would seem too quiet, too small, and too little to do, but for us it is just perfect. With its hot springs and river walk trail, it is just perfect for us, and the hot spring ponds filled with goldfish of a size you simply cannot imagine until you see them. I’ve been told that they came from people getting rid of the small goldfish, and the warm water, along with the pond size, allowed the smaller goldfish to grow quite large. Thermopolis also had a dinosaur museum, although we have never been there. We go to the area for the hot tub and the trail for sure.

While Thermopolis might seem like the safest little out of the way place, there was a time when it was actually a target for an attack. During World War II, the Japanese set their sights on Wyoming. It makes little sense to me, but it was the target they chose. During World War II, the Japanese were experimenting with a new kind of bomb. It really wasn’t the greatest idea, but they did send some of them out. The problem with balloons is that it’s difficult to control where it is going…especially when it is unmanned. It’s hard to say what the exact target was, but on December 5, 1944, coal miners outside of Thermopolis heard something from the skies above and saw an explosion streak across the dark sky. When the object landed, it was discovered to be a Japanese Fu-Go Balloon Bomb. Though the Japanese launched 9,300 of these bombs, only about 300 made it to land, and the Thermopolis bomb was the first one to reach the United States. 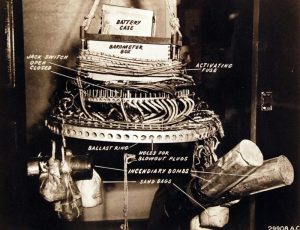 I find it hard to believe that the first Fu-Go Balloon Bomb made it all the way to Wyoming before exploding, when the only Fu-Go Balloon Bomb to actually kill anyone was one that landed near Bly, Oregon on May 5, 1945, that killed a pregnant woman and five children after they approached the unexploded balloon that had landed nearby. The balloon exploded as they investigated it. After that, the public was warned to stay away from the objects, but the news stories were still scarce. In fact, the Japanese only ever learned of the landing in Wyoming!! I have no idea how the media held themselves back.

Landing so many balloons in America was an impressive feat because the inter-continental attack was considered impossible at the time. Whatever the Japanese had hoped to gain by this relatively ineffective “bomb” is unknown, but it was a real failure. My guess is that most of them exploded over the ocean, doing no damage. Nevertheless, these massive balloons were a bit of a marvel…so to speak. They had to carry more than 1,000 pounds across the ocean, which was no easy task, especially for technology at the time. The fact that any of them made it here was impressive, I suppose. They were impressive balloons from a technologic standpoint. They were controlled by altimeters that kept the balloon in the newly discovered jet stream until it was over America, where it would fall to the ground and detonate…or so was the plan. The goal of the mission was to cause panic and fear in the United States, but a media blackout meant that these landings and

explosions went unreported. A blackout was the only way.

These attacks were actually quite amazing, because they were the longest ranged assaults in the history of warfare. It wasn’t until 1982 (during the Falkland Islands War) that the distance was topped. Today, the story of the Fu-Go Balloon Bombing is rarely told in Wyoming outside of Thermopolis, where it has supposedly become local folklore. Strange that I have never heard of it, even with the many years we have been spending our anniversary there. I will most definitely have to ask about it the next time we go. 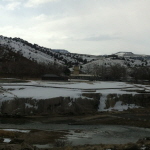 Every year, usually around the first of March, but a little later this year because of spring break, Bob and I take a three day weekend and spend it in Thermopolis to celebrate our wedding anniversary, which is March 1st. It is our way of renewing our relationship. We renewed our vows on our 25th anniversary, when we took a cruise, and that was a beautiful time, but these mini renewing events are very much a blessing too. There is no real itinerary, other than a lovely prime rib dinner and multiple relaxing sessions in tho hot tub. If the weather if nice we go for long walks along the river and up to the hot springs, but if not, we might just relax around the motel room. We usually drive through the buffalo reserve before leaving, but rarely see what we saw this time…6 buffalo right on the road. We thought for a moment they were going to ram our car, but they decided that was too much work

We did take one walk this year, but it was pretty cold, so it wasn’t really the highlight of the trip, but then we were both pretty tired this year, so relaxing in the room 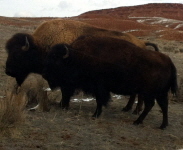 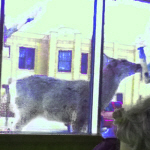 watching television was ok too. When we went to dinner, the deer came out to eat the corn provided for them right by the windows of the restaurant…always a highlight of the trip. It is always amazing to me that the deer are unafraid of the people in the restaurant…even when they are close enough to touch each other were it not for the glass. This year too, we got to watch a couple of little girls get to feed the deer their corn. I’m sure that was a once in a lifetime event for the girls, and we enjoyed watching it too. Dinner was wonderful as usual, and we always enjoy the Safari Club. The animals on display there were mostly shot by the owner, some before they were listed as endangered. Most 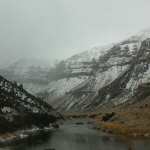 of his hunting now involves shooting the animals with a tranquilizer gun. Taking pictures of his kill, having a veterinarian check them over and treat anything that needs treating, and then he releases them back into the wild. I think that is an awesome thing to do.

All too soon, our anniversary trip is over for another year, but we always come away from these trip closer together than we were before. I think every couple needs those little romantic trips periodically. It reminds you why you are in this marriage, after all. It puts you in tune with each other, and for us it confirms the love we always knew we had.