I suppose a true World War II history buff might know about some of the strange war stories there are out there, and I rather thought I was becoming a World War II history buff, but I had never heard of the Japanese Balloon Bombs. I can’t imagine how a nation could send a random bomb over another nation, not knowing where it will land, or who it will kill…but then, the evil we have seen in the 21st century has proven to be very much the same. I guess there really is nothing new under the sun. Where evil exists, horrible things happen. Such was the case with the Japanese Balloon Bombs. The Japanese were an evil nation at that time, and they didn’t care who they hurt. in 1945, a Japanese Balloon Bomb landed in rural Oregon, ad killed six people . As it turns out, these were the only World War II combat casualties within the continental 48 states. Apparently, the accuracy of the balloon bombs left something to be desired…thankfully.

The idea of a balloon bomb was to send in a bomb that was silent. The problem is that balloons are hard to control. They go with the flow of the wind currents, so you don’t know where they will land. Then again, the Japanese were at war with the world, so they really didn’t care where the balloons would land. The six people who were killed by the Fu-Go or fire-balloon bomb, as they were called, were a Sunday School teacher Elyse Mitchell (and her unborn child), her 13 and 14 year old students, Jay Gifford, Edward Engen, Sherman Shoemaker, Dick Patzke, all of whom were killed instantly, when the bomb exploded. Dick Patzke’s sister, Joan was severely burned, and died moments later. The group had stopped for a moment, because Elyse Mitchell was feeling ill, and while her husband, Reverend Archie Mitchell talked with construction workers in the area, the six victims went to investigate a balloon they saw. It would prove to be a fatal mistake. The group had been going on a Saturday afternoon picnic near Klamath Falls, Oregon. They had only walked about 100 yards from the car. One of the road-crew workers, Richard Barnhouse, said “There was a terrible explosion. Twigs flew through the air, pine needles began to fall, dead branches and dust, and dead logs went up.”

Made of rubberized silk or paper, each balloon was about 33 feet in diameter. Barometer-operated valves released hydrogen if the balloon gained too much altitude or dropped sandbags if it flew too low. The balloons were filled with 19,000 cubic feet of hydrogen and the jet stream drew them eastward. They were designed to travel across the Pacific to North America, where they would drop incendiary devices or anti-personnel explosives. I would think the hydrogen alone would make a horrible bomb, but attached to the 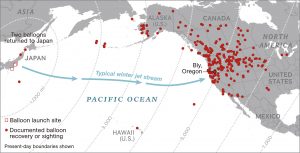 balloon was the actual bomb. The Japanese released an estimated 9,000 fire balloons during the last months of World War II. At least 342 reached the United States, with some drifting as far as Nebraska. Some were shot down. Some caused minor damage when they landed, but no injuries. One hit a power line and blacked out the nuclear-weapons plant at Hanford, Washington. But the only known casualties from the 9,000 balloons…and the only combat deaths from any cause on the U S mainland were the five kids and their Sunday school teacher going to a picnic. What a valiant victory for the Japanese that was. 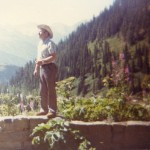 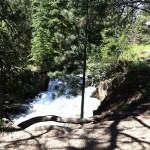