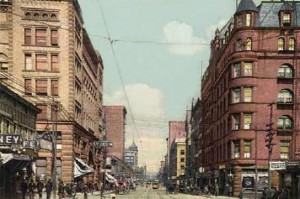 A couple of years ago, my mom, Collene Spencer, my sister, Cheryl Masterson, and I made a trip back to Superior, Wisconsin and Duluth, Minnesota to reconnect, and meet family members there. We had a wonderful trip, and both my sister and I have found sites on Facebook that display pictures of the area. Cheryl and I were both born in Superior, Wisconsin, so we feel a closeness to the area, even though we have not lived there for many years. It is still the area of our roots. Now that we have been back in a more recent time, a continue to feel drawn to the area. The strange thing is that the things I am interested in at this time, are more historic things…some of them, things that no longer exist. In my memory, we didn’t spend a lot of time in Duluth, but I’m probably mistaken on that count…at least to a degree. Superior, Wisconsin and Duluth, Minnesota are so close to each other, that if there were no signs to tell you so, you might not realize that you have left one and entered the other. I’m sure my parents shopped in Duluth, simply because as the larger of the two cities, there was quite likely more variety there.

Recently, I started looking into some of the history of that general area, and stumbled on something 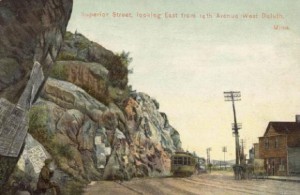 interesting. Duluth had an incline railway. Personally, I like incline railways, but I have never seen one that was in a city. Incline railways seem more like something that you would see at a tourist attractions, than anything that you would use in everyday life. Nevertheless, Duluth, in 1891, had a streetcar line, and in December 1891, the Duluth Street Railway Company opened the incline railway, as part of that street car line. The Incline Railway was on the right-of-way of Seventh Avenue West. The Duluth Street Railway Company had received a charter from the state in 1881 to build a streetcar line for Duluth. The hillside on Seventh Avenue West was too steep for a regular rail line, so they built an incline railway for that area. From it’s base station on Superior Street, the Incline climbed 509 feet in slightly more than half a mile, on a ten foot gauge track. Originally, a pair of forty one by fifteen foot cars counterbalanced each other, one going up while the other one descended. They were built to accommodate four teams and wagons, or up to 250 standing passengers. The Incline was powered by a stationary steam engine at the top. The trip took sixteen minutes, one way…just enough time to make it an enjoyable trip.

In 1925, it was noted that the Incline carried an average of 2,170 weekday passengers, while the connecting 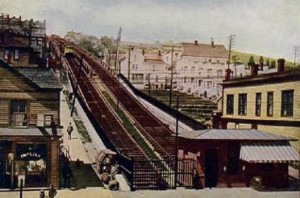 Highland streetcar line carried an average of only 1,114 weekday passengers. I’m sure that was because people like incline railways…they are unique….besides, climbing that hill would not be fun. Hourly checks showed that most riders traveled downhill in the morning rush hour and uphill during the afternoon rush hour. Most likely they were commuting to and from work. The Duluth Incline Railway was never profitable. Nevertheless, it and the Highland line were the last remnants of the streetcar system to be replaced by buses. Their last day of service was September 4, 1939. For that reason, I’m sure that many of the current residents of Duluth don’t even know about the incline railroad. I didn’t either, until I stumbled on it.