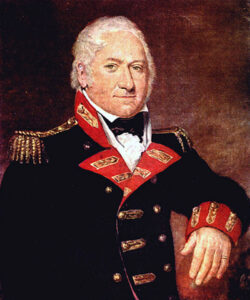 Most of us have heard of shrapnel. Shrapnel shells have been obsolete since the end of World War I for anti-personnel use, but they were “anti-personnel artillery munitions which carried many individual bullets close to a target area and then ejected them to allow them to continue along the shell’s trajectory and strike targets individually. They relied almost entirely on the shell’s velocity for their lethality.” These days, high-explosive shells are used for that role. The functioning and principles behind Shrapnel shells are fundamentally different from high-explosive shell fragmentation. Shrapnel is named for its inventor, Lieutenant-General Henry Shrapnel (1761–1842). Shrapnel was a British artillery officer, whose experiments, initially conducted on his own time and at his own expense, culminated in the design and development of a new type of artillery shell.

Henry Shrapnel was born June 3, 1761 at Midway Manor in Bradford-on-Avon, Wiltshire, England, the ninth child of Zachariah Shrapnel and his wife, Lydia. Shrapnel became an artillery officer and inventor of a form of artillery case shot (shrapnel). He was commissioned in the 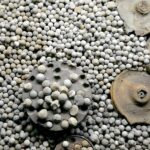 Royal Artillery in 1779, and served in Newfoundland, Gibraltar, and the West Indies. He was wounded in Flanders in the Duke of York’s unsuccessful campaign against the French in 1793. In 1804 he became an inspector of artillery and spent several years at Woolwich arsenal.

In 1784, while a lieutenant in the Royal Artillery, he perfected, with his own resources, an invention of what he called “spherical case” ammunition: a hollow cannonball filled with lead shot that burst in mid-air. He successfully demonstrated this in 1787 at Gibraltar. He intended the device as an anti-personnel weapon. In 1803, the British Army adopted a similar, but elongated explosive shell which immediately acquired the inventor’s name. It has lent the term “shrapnel” to fragmentation from artillery shells and fragmentation in general ever since, long after it was replaced by high explosive rounds, but this usage is not the original

meaning of the word. Until the end of World War I, the shells were still manufactured according to his original principles.

In 1814, the British Government recognized Shrapnel’s contribution by awarding him £1200 (UK£ 85,000 in 2021) a year for life, however, bureaucracy kept him from receiving the full benefit of this award. He was promoted to the office of Colonel-Commandant, Royal Artillery, on March 6, 1827, and to the rank of lieutenant-general on January 10, 1837. Shrapnel lived at Peartree House, near Peartree Green, Southampton from about 1835 until his death on March 13, 1842 at Southampton, Hampshire.