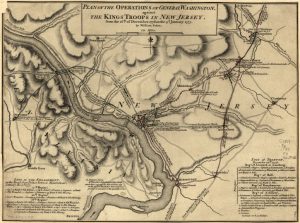 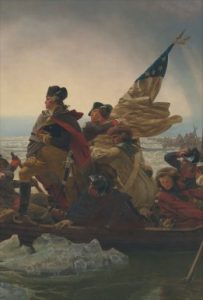 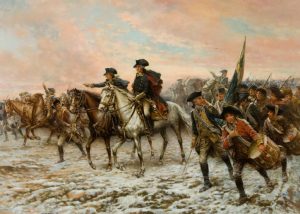 A Stupendous Feat Of Logistics 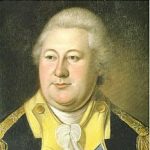 The Washington cousins, George and William, are cousins of my husband’s family as well, and so their heroism is of interest to me. General George Washington, before he became our first president, was a great general, who played a huge part in making the United States the great nation it is. But, there was another cousin, who played a part…whether George Washington knew that or not, I can’t say, but they did work together to bring a victory in the Revolutionary War that was quite unusual in it’s scope…for that era anyway. That cousin, was Henry Knox, who was born on July 25, 1750, the seventh of ten children of William and Mary Knox.

During the Revolutionary War, it was not unusual for armies to winter somewhere, and then pick up the war in the spring. Because they couldn’t go from place to place as quickly then as they do now, they were left with little choice. Soldiers could die in the frigid conditions, if they didn’t find someplace to wait out the winter months…or so it was thought. Knox was in the military serving with Massachusetts forces in the Army of Observation during the opening days of the Siege of Boston. His abilities soon brought him to the attention of new army commander General George Washington when the general inspected fortifications designed by Knox near Roxbury. The two men quickly became friends. When the army desperately needed artillery, Washington consulted Knox for advice in November 1775. Knox suggested the idea that the 59 cannons recently captured at the fall of forts Ticonderoga and Crown Point in upstate New York 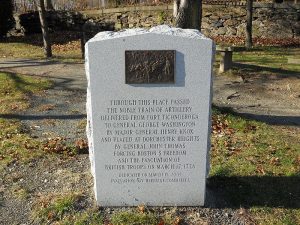 could have a decisive impact on the outcome of the siege. Knox did not have a commission in the army, but John Adams in particular worked in the Second Continental Congress to acquire for him a commission as colonel of the army’s artillery regiment. Washington was so impressed that he put Knox in charge of an expedition to retrieve them even though Knox’s commission had not yet arrived. Reaching Ticonderoga on December 5, 1775, Knox commenced what came to be known as the noble train of artillery, hauling by ox-drawn sled 60 tons of cannons and other armaments across some 300 miles of ice covered rivers and snow draped Berkshire Mountains to the Boston siege camps.

The region they were traveling through to reach Boston was lightly populated and Knox had to overcome difficulties with hiring personnel and obtaining animals. On several occasions cannons crashed through the ice on river crossings, but the detail’s men were always able to recover them. In the end, what Knox had expected to take just two weeks actually took more than six, but he was finally able to report the arrival of the weapons train to Washington on January 27, 1776. The operation was called “one of the most stupendous feats of logistics” of the entire war by historian Victor Brooks. Knox’s effort is commemorated by a series of plaques marking the Henry Knox Trail in New York and Massachusetts.

Upon their arrival in Cambridge the cannons were immediately deployed to fortify the Dorchester Heights recently taken by Washington. So commanding was the new battery over Boston harbor the British withdrew their fleet to Halifax. With the siege ended, Knox undertook the improvement of defenses in Connecticut, Rhode Island, and New York City in anticipation of British attack there. In New York he met Alexander Hamilton, commander of the local artillery. The two men formed a close friendship that lasted until Hamilton’s death in 1804. During his military service Knox also established a close friendship with fellow Massachusetts native Benjamin Lincoln. Henry Knox would go down in history as being one of the great strategists in this nation.