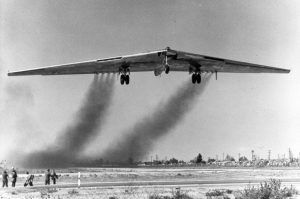 Most airplanes in the 1940s were of a similar design…the kind that were a simple wing design. There was, however, a futuristic flying machine that made it’s debut on October 21, 1947. The Northrup YB-49 Flying Wing was a prototype jet-powered heavy bomber developed by Northrop Corporation shortly after World War II for service with the United States Air Force. The YB-49 featured a futuristic flying wing design and was a turbojet-powered version of the earlier, piston-engined Northrop XB-35 and YB-35. The test flight of the Northrop YB-49 took place at Northrop Field, Hawthorne, California. It was piloted by Chief Test Pilot Max R Stanley. That first flight seemed to be going well, but it faced stability problems during simulated bomb runs and political problems doomed the flying wing.

The unusual configuration, for an aircraft of that time, had no fuselage or tail control surfaces. The crew compartment, engines, fuel, landing gear, and armament were contained within the wing. Air intakes for the turbojet engines were placed in the leading edge and the exhaust nozzles were at the trailing edge. Four small vertical fins for improved yaw stability were also at the trailing edge. While the design might have had many stabilizing characteristics, it was still basically a set of wings, connected together, with a small crew 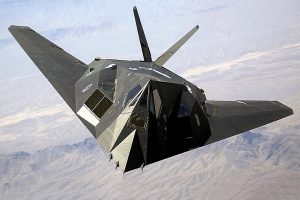 compartment in the middle. I suppose it looked like an early version of the F-117 Nighthawk stealth airplane, but with much bigger wings and a much smaller crew cabin.

The YB-49 was powered by eight General Electric, Allison Engine Company, J35-A-5 engines. A variant of that engine was used in the North American Aviation XP-86, replacing its original Chevrolet-built J35-C-3. The engines were later upgraded to J35-A-15s. The J35 was a single-spool, axial-flow turbojet engine with an 11-stage compressor and single-stage turbine. It shocks me that there was such a thing as a turbojet engine back then, but apparently there was. During the testing of the YB-49, it reached a maximum speed of 428 knots (493 miles per hour) at 20,800 feet. It had a cruising speed of 365 knots (429 miles per hour). The airplane had a service ceiling of 49,700 feet. The YB-49 had a maximum fuel capacity of 14,542 gallons of JP-1 jet fuel. Its combat radius was 1,403 nautical miles. The maximum bomb load of the YB-49 was 16,000 pounds, though the actual number of bombs was limited by the volume of the bomb bay and the capacity of each bomb type. While the YB-35 Flying Wing was planned for multiple machine gun turrets, but none were attached. 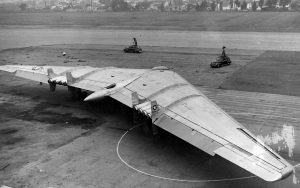 In the second test flight, the unstable YB-49 crashed on Jan. 13, 1948. After the crash, the testing continued with both aircraft until the second YB-49 crashed on June 5, 1948. They tried to make the plane work, but it just didn’t seem to be in the cards. The crew of the crashed YB-49 included Major Daniel H Forbes Jr, pilot; Captain Glen W Edwards, copilot; Lieutenant Edward L Swindell, flight engineer; Clare E Lesser and C C La Fountain. Later, The two pilots were honored with the naming of two Air Force installations. Edwards Air Force Base, California, was named in honor of Captain Edwards, and Forbes Air Force Base, Kansas, was named in honor of Major Forbes.