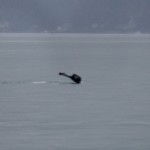 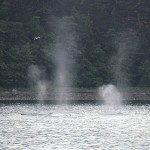 I never really gave very much thought to whales before our trip to Alaska. I had always thought they were interesting, and liked pictures I had seen of them breaching and of their tails standing straight up and then slowly slipping into the water and they dived down for another feeding run, but on a personal need to see them for myself kind of basis, no. I really never felt a huge tug at my heart for my own personal encounter with them, like my daughter, Amy had always felt about dolphins. Then, I went to Alaska, and on our trip, we planned a whale watching tour. That tour changed things for me. I didn’t want it to end. I found myself watching the water wherever we were, hoping for just one more glimpse of them…one more tail view…one more breach. It didn’t happen, unfortunately. After the whale watching tour, no more whales came into view, but that tour…well, I will never forget it.

We set out, and the plan was to go out to where the seals hung out…which we did, but we were surprised but a whale in that area. Her name was Sasha. We found it surprising that the whales had names, and even more that our guides were so sure that this one was Sasha, until we were told that the underside of a whale’s tail is like our fingerprint. Each one is unique, and the whales can be identified by the underside of their tail. So now we knew that this was indeed Sasha, and not just some guide pulling our leg. One of our guides, Mark Kelley, had been photographing whales for years, and had helped illustrate a book on whales that I had to 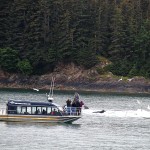 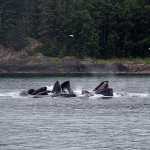 have. Mark was probably almost a friend to some of them, since he had been near them so often.

After seeing the seals, which is it’s own story, we went on in search of more whales, and we were treated to a fairly rare event, and one that many people never get to see…a Bubble Net Feeding. A Bubble Net Feeding is the whales’ most inventive technique; a group of whales swim in a shrinking circle blowing out bubbles below a school of prey. The shrinking ring of bubbles encircles the school and confines it in an ever-smaller cylinder. This ring can begin at up to 98 feet in diameter and involve the cooperation of a dozen animals. Some whales blow the bubbles, some dive deeper to drive fish toward the surface, and others herd prey into the net by vocalizing. The whales then suddenly swim upward through the “net”, mouths agape, swallowing thousands of fish in one gulp. Plated grooves in the whale’s mouth allow the it to easily drain all the water initially taken in. This procedure was something I had never heard of before, but we were told that whales most often feed alone, and so our guides and our bus driver after the tour were all very excited about it. I was too, because this is where I caught my best pictures of the whales.

I became mesmerized by these amazing mammals, and found myself snapping picture after picture, often of the same whale, who had only moved a few feet, not wanting to miss anything amazing they might do. I was not disappointed either. I got to photograph the whole group breaching, as they took in all those fish, and I photographed tail after tail…including my prize shot of a tail straight up in the water, before it slipped beneath the surface. It was an 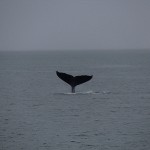 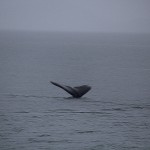 amazing day. I saw so many movements of the whales. They performed for us, without really even knowing or caring how we felt about it, although they knew we were there, because they have great perception concerning the things around them. Nevertheless, they were busy, and we were simply spectators to this amazing event. I had such a great time, and I can see how some people could be addicted to this pastime. So, would I go whale watching again…in a heartbeat.