But For The Grace Of God 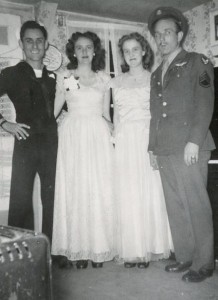 So often, we take many of the people in our lives for granted. We just assume that they will always be there, and never consider the events in their past that…were it not for the grace of God, would have taken their lives, possibly before we even knew them. That is the case with my Uncle George. Were it not for the grace of God, he would have been killed in action in World War II, before he ever had the chance to meet and marry my Aunt Evelyn, becoming father of my cousins, and an uncle to me and the rest of the cousins. Uncle George, like my dad, my Uncle Larry, Uncle Wayne, and many other young men of that era, served his country during World War II. Many people serve in the wars our country has been involved in, and many people are injured and killed every day as a result of their service in our wars. In that way, Uncle George is not an unusual statistic, but what is unusual is that Uncle George survived…a head injury!!! He has had a plate in his head since that injury, but in every other way, he has lead a normal life.

People who don’t know about a situation, which was me concerning my Uncle George…until recently when I came across the Wyoming Wounded List where his name appears, usually assume that the person they know, and have known all their lives, was never wounded. Little did I know how very wrong I was. I knew that Uncle George has been in the Navy in World War II, but that was all I knew about his war history, and I only knew that because of a picture of my Aunt Evelyn, Uncle George, and my parents attending the Military Ball. You see, like most of the men who fought in World War II and probably many other wars too, Uncle

George never spoke of those days. It was like he either wanted to forget, or more likely that he thought he had simply done his duty and it was no big thing, because he came home after all. Many military men feel that way. They think the heroes are the ones who died for their country, but that is not the only way to be a hero. Just going into battle, makes them a hero!!

After learning about my Uncle George’s injuries from World War II, I feel so much more blessed to have Uncle George in my life. Thinking that, but for the grace of God, he would never have been my uncle, makes that blessing very clear to me, and I thank God for his life and for making him my uncle. I can’t imagine our family without him in it, and I know everyone else agrees with me too. Today is Uncle George’s birthday. Happy birthday Uncle George!! Have a great day!! We love you!!