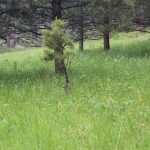 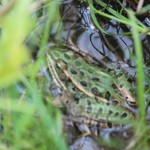 Because Bob and I have been hiking for more than twenty years now, I have always thought that we were careful travelers through places that are home to the creatures of the forest. We don’t leave garbage behind, and we keep our distance when we spot wildlife. It is a show of respect for them, and most often, our distance creates a feeling of careful comfort for the wildlife we pass along the trail. Still, there are times when we inadvertently get a little close. It isn’t because we were careless, but rather that we didn’t see them and I guess they didn’t see us in time either. Most often this occurs with animals like chipmunks, squirrels, mice, or birds, but sometimes deer too. It is times like these that I realize that we are really interlopers in their world. Somehow, that never exactly occurred to me before.

While hiking the Centennial Trail in the area where it crosses the tracks for the 1880 Train, beginning at the Big Pine trailhead, and going to the Samelius trailhead, we came across several Ruffed Grouse. They were in the grass right beside the trail. We didn’t see them, and somehow we managed not to disturb them until we were just steps past them. Suddenly they were spooked by our presence, and we were spooked by theirs. The 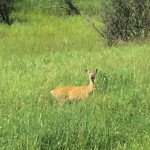 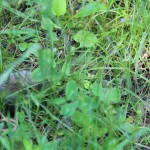 second they bolted, we were so startled that I tried to get the picture of them, and all I got was the turkey that had been there with them. The picture of the turkey in itself was kind of cool though, because somehow the turkey manage to be behind a small tree at just the right angle to be almost invisible to my camera’s eye. I had to look close to realize that I had caught anything in my shaken state.

It was then that I began to think about the fact that no matter how careful, or quiet, or respectful we are, we are still interlopers in their world, and it is still disturbing to them to some degree. True, the lone doe eating grass simply stood and watched us, and the bird intent on the worm it was taking back to its babies went about its business, and the mouse eating grass allowed us to pass by quite closely, and the frog sitting in the water puddle decided that he was not going to jump, even if we were very close by. They allowed us to be in close proximity to them, somehow trusting that we were not there to hurt them. Nevertheless, even with their guarded trust, they still felt like we did not belong there. We were still in their world, and they would prefer that we would leave.

This revelation will not change the fact that we like to hike, nor will it keep us from hiking, because hiking is 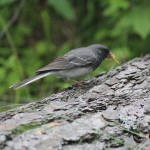 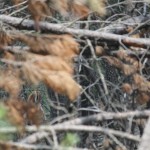 what we do, but it does give me a new respect for the creatures who live along the trails we like to hike. I feel a new desire to somehow tiptoe through their backyard without disturbing them too much. I want to be the stranger that they allow to pass quietly through, even if they take a guarded stance, because I am not there to hurt them, but rather just to take a peek into their world. All we want is to quietly pass through and drink in the beauty that the animals may not notice any more that we do our own living room, because to them it is normal and everyday, but to us it is extraordinary.