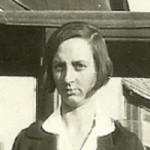 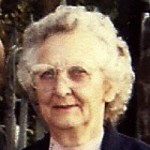 My husband’s grandmother, Vina Hein was an amazing woman. We always loved going up to visit her and Grandpa Hein. They lived on a ranch outside of Forsyth, Montana, and that place will forever live in my memory files. I can see every part of the house and the different things we did there. I remember all the nights of playing cards. We always played “Spades” and Grandma always had a funny saying when she looked at her hand and it wasn’t a good one. She would tell us that she had “a hand like a foot!!” We often looked through all the old photo albums too. Those pictures are great treasures, and I feel privileged to have been able to look through them. They were pure family history. Going to see Grandma and Grandpa Hein was such a blessing, and one I will always cherish.

Grandma Hein was born on Groundhog’s Day, a fact that she enjoyed very much. It seems that finding out if spring would come early each year was something special. Of course, the biggest problem with that is that all too often Punxsutawney Phil was, and still is, very wrong. I have given up on that silly ground hog!! Even with this morning’s prediction that we will have 6 more weeks of Winter, it would be just a coincidence if that is the way it went, because that silly ground hog gets it wrong 99% of the time. Still, for Grandma, it was cool to have that birthday. I guess that when you think about it, at least you were on the downhill side of the Winter, so spring was coming.

I think Grandma was like me, in that Winter was her least favorite season. Living in the country is more work anyway, and the Winter weather makes it worse. Montana winters are notoriously bitter, so I can see why she would rather have any other season. Grandma wasn’t one to have lots of flowers in the house, that I recall, but 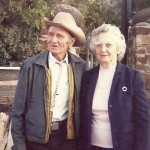 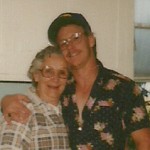 that didn’t mean she couldn’t grow a garden, because she certainly could. She canned vegetables and made jellies and apple butter. She also made wonderful strawberry-rhubarb pie. there was also always plant of fresh real cream on her table from the cows they milked. You haven’t tasted cream, until you have had it fresh, without all the processing. Oh my!! It is so good. I will never forget the trips we took to see Grandma and Grandpa Hein. I will always have those cherished memories. Today would have been Grandma Hein’s 112th birthday. Happy birthday in Heaven Grandma Hein. We love and miss you very much.

I can’t think of Groundhogs Day without thinking of my husband, Bob’s grandmother, Vina Leary Schulenberg Hein, who was born on that day. I don’t suppose that first Groundhog’s Day mattered much to her or to her parents. They were too busy having a new baby to think about whether or not it would be an early spring. I think later on though, Grandma liked sharing her birthday with Groundhog’s Day…at least we all knew that she thought it was special, because she did mention it a few times.

Bob’s grandmother would have been 107 this Groundhog’s Day…if she were still with us. I miss her a lot. I was always short on grandparents, because my dad’s dad passed away before my parents were married, and my dad’s mom passed away when I was six months old. Growing up, all we had were my mom’s parents, and they were both gone by 1988. By 2004 all the grandparents were gone, and I miss each and every one of them. I was grateful to have Bob’s grandparents to be my own too. They always made me feel welcome. 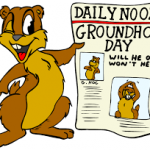 Every year as Groundhog’s Day approaches, I find myself looking for the upcoming weather reports for Punxsutawney, Pennsylvania, since that is where Punxsutawney Phil lives. I have often wondered how a groundhog in Pennsylvania could predict the coming Spring in Wyoming, but they say he does. Nevertheless, every time he predicts six more weeks of Winter, I hope he fails in that years prediction. They say he is never wrong, but I think he certainly could be…especially when we have cloudy weather here, so seeing his shadow would not be an option here. This year they predict partly cloudy weather for Punxsutawney, Pennsylvania, so an early Spring doesn’t seem likely, but I can dream can’t I. Today would have been Grandma Hein’s 107th Groundhog Birthday. Happy birthday in Heaven Grandma. We love and miss you very much.

As I was looking through some old pictures, I came across one of a house. It was old, with it’s windows and doors boarded up. At first I thought that it was sad that so many houses around our country are left to fall apart, right in a town where people are using the homes all around it. I couldn’t figure out why this house had some significance, when so many others don’t. Then I looked at the back of the picture and I was surprised at what I found. First of all, so many of the pictures I have looked at, were not written on at all, leaving so much of the family history to the imagination…frustrating to say the least, and I know too that I have been guilty of that myself. We think that we will know the people in the picture, and we will, but what of the people in years to come…our children and grandchildren or even, great grandchildren…what will they know of the people or places in the picture.

So, what of the house in the picture I found…well, it was the house that Bob’s grandmother, Vina Nona Leary Schulenberg Hein was born in, 105 years ago today. It’s strange to think that you are looking at a house that was the specific location of a specific event over a century earlier, but that is exactly the case. Most births took place in the home back then, and this one was no different, in fact, it was probably completely routine…to them. To most of us today, that seems incredible, even though home births are making a comeback.

Grandma Hein’s birthday was always easy for me to remember, because it came on Groundhog’s Day. I’m sure that was always something her whole family thought was a cool thing too. Having a birthday on a special day or holiday can be fun, with the possible exception of Christmas. I have heard that a Christmas birthday, or even close to it, can be a real bummer with the whole gift thing and all, but any other special day is a cool thing. Grandma’s birthday being on Groundhogs Day, marked the day of either the promise of an early spring or 6 more weeks of a dreary winter. I don’t know, that one might depend on the 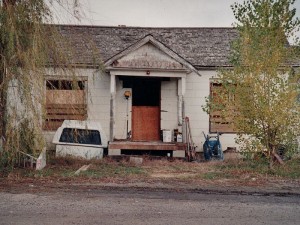 outcome, as to whether it was a cool birthday or not. Nevertheless, being able to look at the very house that was aflutter with activity on this Groundhog’s Day 105 years ago is a cool thing to me. I have to wonder what the walls of this old house could tell us of that day. Quite a bit I expect. It’s a bit sad to think that no little children run and play in it’s rooms, no wonderful smells fill it’s rooms, no family enjoys the warmth of it’s rooms, but rather it has become a sad empty structure left to fall apart. Still, it was an important place in it’s day…Grandma’s day of birth 105 years ago today. Happy birthday Grandma!! We love and miss you very much.