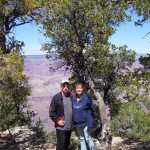 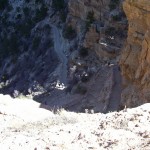 In this country, we have been blessed to have people who recognize a national treasure for what it is, and make sure that it gets preserved for people in generations to come to be able to enjoy it too. In my life, I have been blessed to visit many of these treasures, like Yellowstone National Park, Mount Rushmore, Crazy Horse Mountain, Glacier National Park, Niagara Falls, and the Grand Canyon…which was made a national monument on this day, January 11, 1908. Of course, the Grand Canyon was formed thousands of years ago, but it wasn’t until someone looked at it and saw the beauty it could share with so many people, if it was protected from land developers, mining companies, and other such developers who could only see it for its monetary value.

In my lifetime, I have had the opportunity to visit the Grand Canyon three times. Each time was significantly different from the others. The first time was as a child, and that trip stands out in my mind as the discovery trip. This was a place I had never seen before and probably hadn’t even thought about, but my parents knew of its existence, and that they wanted their girls to be able to see its glorious beauty. I don’t recall feeling wary of it edges, but that was probably because I was the kid, and not the parent who had the task of watching the kids. I just remember that its red walls were gorgeous, especially at sunset. It was a trip taken almost fifty years ago, but I can still remember how amazing it was.

The second trip I took to the Grand Canyon was in 1986, when my husband, Bob Schulenberg and I took our girls, Corrie and Amy to see it. The trip taken as a mother was one that felt a bit different. My girls weren’t so little, and eleven and ten, that they didn’t stay right with us, but nevertheless, Amy found herself just a little too close to the unfenced edge, and she slipped a little. By the grace of God, she didn’t fall in, but it is an event she still talks about to this day. I think she would go back again, because she was not really afraid, once the moment passed, but she gained a respect for edges like that. As the mom, I determined to put myself between the children and the edge from that point on. We still very much enjoyed that trip, but it was very different from either of the others.

The most recent trip Bob and I took to the Grand Canyon was in April of 2009, and it was probably the most fun trip of the three. We didn’t have to worry about little ones, and we were both in good shape. We hiked the 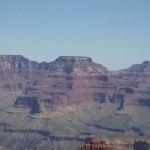 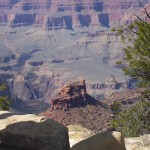 southern edge of the canyon, and went down into it at both ends of the trail. It was an amazing trip. Looking at the canyon from the top is awesome, but there is something about being down inside it that will always live in my memory files. It wasn’t that the canyon looked so very different when you were inside, but rather that you were inside the Grand Canyon that made that event special. I loved being able to go down the trails and through the tunnel we found there, and see the magnificent beauty up close. It was an amazing trip, and I happily would go again. The Grand Canyon is unforgettable.