And We Thought We Knew Her 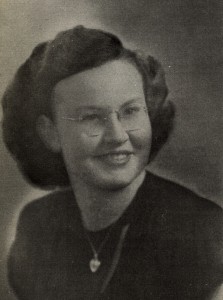 We often think we know everything there is to know about a person, but what we don’t know would really surprise us. Recently while going through some old pictures, I came across my mother-in-law’s high school yearbooks, and her old scrap book. What I found in there surprised me very much, but that is not so surprising, since I first met her when she was 43 years old. Nevertheless, I expect that some of the things I found out about her, will surprise even her children, because I know they don’t know most of what I discovered.

For all the years I have known my mother-in-law, she was a homemaker, and pretty much a home body. She liked knitting and crocheting, and had done quite a bit of sewing in her time. She canned vegetables, and had raised many a cow for beef for the family. She loved horses, and as a girl, she would have rather been on a horse than pretty much anywhere else. That is all things we all did know about her. But…in high school, my mother-in-law was quite the joiner. Now that surprised me very much. 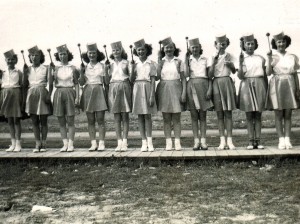 Her extra curricular activities included things like office aide and library staff, neither of which would be outside the realm of what I would have expected from her, nor would working on the annual staff or even the school paper, called The Shovel. Any of those things might have been something that I could see her being interested in. Really, other than the horse riding, my mother-in-law had always seemed to me like the quiet type, who didn’t like things that were noisy or too strenuous, so any of these things would fit into my idea box for her personality.

Then, my idea of just who she was, took a major hit. The scrapbook showed pictures of her as a member of the school drill team…the baton twirlers, as many of us would know them. I thought, “Wow!! That just doesn’t seem like her at all!!” To add to my surprise, I found that she was also a member of the pep club!! You can’t even get her interested in 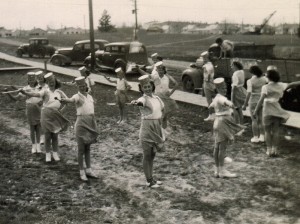 watching a football game today, so what was this all about? After this, I wasn’t totally surprised to find that she was on the basketball team, but since she as not been very athletic in all the years I have known her…not even wanting to go for a walk, I must say, it was hard to imagine her being out on the basketball court.

By now, my whole view of the person my mother-in-law used to be has been completely shattered, so I began to be prepared for more surprises to come, and she did not let me down in that area either. Since I have never heard my mother-in-law sing, my next big shocker was to find that she was a member of the Glee Club…who would have thought that?? But, it doesn’t stop there. She was also a member of the Dramatics Club. Imagine that, my mother-in-law the actress. I simply cannot imagine her being in a play, but apparently she was. And lest we leave out perhaps one of the most shocking 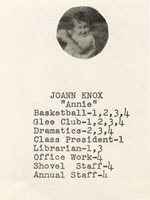 things, I was informed that she was into school politics!! In fact, she was it’s leader, being duly elected Senior Class President of the Class of 1949 at Colstrip High School in Colstrip, Montana. She has never been interested in politics that I can recall, and mostly wouldn’t even discuss it much.

I’m sure you think that you have heard all the things about my mother-in-law’s high school years that there could possibly be to tell, but you would be wrong, because the thing that shocked me the most, whether it should have or not, was the fact that while my mother-in-law has never gone by anything but Joann in all the years I have known her, apparently there was a time when she was…Annie. I wouldn’t have believed it myself, but it is there in black and white in her yearbook. Today is my mother-in-law’s 83rd birthday!! Happy birthday…Annie! Have a great day!! We love you!!