When Cash Was Worthless 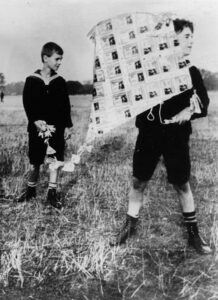 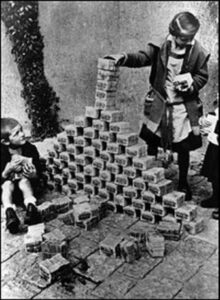 When inflation spirals out of control, as in post-World War I Germany, the country’s money soon becomes almost worthless. In 1923, when a battered Germany was struggling to recover from the war, the country was beset with hyperinflation and the German Mark became just that…virtually worthless. At one point, 4.2 trillion German marks was worth just one American dollar. Germany gradually spiraled into such an economic catastrophe that, by November 1923, the German Mark had so degraded that it took 200 billion Marks to buy a loaf of bread. No one in Germany had that kind of money. It was a disaster, and it brought about a number of bizarre events that would shock anyone who has never lived through it.

At some point people began to realize that they couldn’t buy anything with the money, so maybe the money needed to have a different use. One woman decided that since she didn’t have enough money for material to make a dress, she would use money to make the dress. Children were allowed to use stacks of banknotes to play with like blocks, and children made kites out of cash. Some people had an even better use for the money. They burned it for fuel. While all that might seem “funny,” not every effect was “funny.” One effect of the disaster was the destruction of middle class people’s savings, and Adolf Hitler exploited that one. He wasn’t having any financial difficulties, because he had control pf everything.

The crisis began during the First World War, when the German government printed unbacked currency and borrowed money to finance its dream of conquering Europe. It is always dangerous to print money with no gold to back it up. The government had an ingenious plan, however. They planned to pay off the debts by seizing resource-rich territories and imposing reparations on the vanquished Allies. I suppose that might have worked if they had not been beaten into submission in 1918. Then, Germany ended up with enormous debts alongside huge, punitive reparations owed to the Allies under the Treaty of Versailles. Inflation crept up slowly at first, before accelerating rapidly in late 1922. By autumn 1923, the country was in full economic collapse. The rate of inflation was 3,250,000% a month and prices for daily commodities doubled in a matter of hours.

During the crisis, workers paid by the hour found their wages were essentially worthless, because the prices had risen since they began their shifts. Pensioners on fixed incomes were the most badly hit and people’s life savings suddenly became worth less than a loaf of bread. Farmers eventually refused to bring produce into the city as the requirements to calculate and recalculate commercial transactions in the billions and trillions made it practically impossible to do business in cash. Storekeepers couldn’t do business fast enough to protect their cash receipts, so shops were abandoned. As people went through more and more panic situations, it led to uprisings. A far-left workers’ revolt in the industrial Ruhr region led to a 50,000-man ‘Red Army’ which took control of the area before being put down by the army. Adolf Hitler and the Nazi Party also attempted a failed government takeover in Munich, which became known as the Beer Hall Putsch.

The fever of hyperinflation finally broke in late 1923, when the government began issuing the new Rentenmark. The Rentenmark was a currency that was backed by mortgages on agricultural and industrial land, which was

introduced with the old exchange rate of one US dollar to 4.2 Rentenmarks. It was a much more manageable difference for the people. The new currency’s foundation was shaky at best, but after going through years of terrifying instability, the German people were just desperate enough to trust it. Still, the German middle-class had been essentially ruined by the fiasco. The worst side-effect of the hyperinflation fiasco was that many members of the ruined middle classes ultimately became receptive to extremist propaganda, with many flocking to Adolf Hitler and the Nazi Party, as well as other anti-human ideologies like Communism. Sadly, when the system that they had been comfortable with failed because of the corruption of its leaders, they made the biggest mistake of all, they turned to the worst alternative as their new form of hope. That would prove an even bigger disaster in the coming World War II.