On June 16, 1858 more than 1,000 delegates met in the Springfield, Illinois, statehouse for the Republican State Convention. They chose Abraham Lincoln as their candidate for the U.S. Senate, running against Democrat Stephen A. Douglas. At 8:00 pm Lincoln delivered his famous House Divided speech to his Republican colleagues in the Hall of Representatives. Lincoln said, “A house divided against itself cannot stand. I believe this government cannot endure, permanently, half slave and half free. I do not expect the Union to be dissolved — I do not expect the house to fall — but I do expect it will cease to be divided. It will become all one thing or all the other. Either the opponents of slavery will arrest the further spread of it, and place it where the public mind shall rest in the belief that it is in the course of ultimate extinction; or its advocates will push it forward, till it shall become lawful in all the States, old as well as new — North as well as South.” Abraham Lincoln decided to run for president, and was elected president on November 6, 1860, and on December 20, 1860 it began…South Carolina seceded from the Union, followed within two months by Mississippi, Florida, Alabama, Georgia, Louisiana, and Texas. On February 9, 1861 the Confederate States of America was formed with Jefferson Davis as it’s president. Abraham Lincoln was sworn in as the 16th President of the United States of America on March 4, 1861. On April 12, 1861 the Confederates under General Pierre Beauregard attacked Fort Sumter in Charleston, South Carolina…the Civil War had begun.

The war was long and bloody. Families were torn apart, as brothers fought against brothers and fathers against sons. The South wanted slavery, and the North did not. This war would be a horrible, brutal war. Losing was not an option for the North. Slavery had to be abolished…it was inhumane, and wrong in every sense of the word. This was Lincoln’s signature change to this nation, and those who didn’t want it hated him for it. The battles raged for four long years, ending the lives of 618,222 Americans and eventually sending 50,000 survivors home as amputees. The Civil War would go down in history as the deadliest of all United States wars…and the enemy wasn’t a terrorist group or some other country…it was us. I think it is a sad thing to think that we were our own worst enemy at one time in history.

The battles of the Civil War are names many people remember from their history lessons, Chickamauga, Chattanooga, Cold Harbor, Chancellorsville, Fredericksburg, Bull Run, and a second Bull Run, Shiloh, Antietam..which was the bloodiest day in US Military history with 26,000 men killed, and of course the famous Battle of Gettysburg on July 1-3, 1863, which was the battle that turned the tide in favor of the Union. On November 19, 1863, President Lincoln gave his famous Gettysburg address dedicating the Soldiers’ National Cemetery. The war continued for another year and a half, before General Robert E Lee, being completely surrounded by Union forces, with no possibility of escape, surrendered to General Ulysses S Grant at Appomattox, Virginia. They agreed to a meeting in the parlor of the Wilmer McLean home. The meeting took place at one o’clock in the afternoon, and on this day, April 9, 1865 General Robert E Lee surrendered. 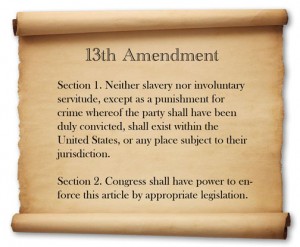 The Union had all but won, but this was not over yet. On April 14, 1865, the Stars and Stripes was raised over Fort Sumter…where the war began. That night President Lincoln and his wife, Mary, went to see the play “Our American Cousin” at the Ford Theater. At 10:13pm, during the third act of the play, Confederate sympathizer John Wilkes Booth shot the president in the head. He was moved to the house across the street where doctors tried in vain to save his life. President Lincoln died at 7:22am on April 15, 1865. The war dwindled to a close, and in May the final soldiers surrendered. The Union was restored, and the Thirteenth Amendment to the United States Constitution was passed by Congress on January 31, 1865, and was finally ratified on December 6, 1865.