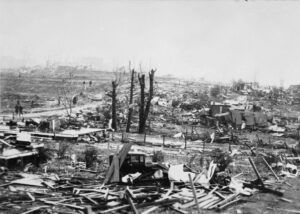 Tornadoes are a common storm in some parts of the United States. The most common area for them is called Tornado Alley. Usually, when storms go through, you might hear of tornado watches. That doesn’t mean that there are multiple tornadoes in an area, but it could. In 1936, beginning on April 5th and extending through April 6th, the states of Mississippi and Georgia found themselves in the middle of a tornado outbreak, which is several tornadoes in an area, of course. This is the only continuous tornado outbreak in United States history to produce more than one tornado with triple digit death tolls. Also, severe flash floods from the associated storms caused millions of dollars in damage across the region.

The storm, called the Tupelo-Gainesville Outbreak, produced at least 12 tornadoes. The outbreak took place over two days, April 5th and 6th, but was really just about 12 hours in duration. The storm hit Tupelo, Mississippi at 8:30pm on April 5, 1936. It was the fourth-deadliest tornado in United States history. The storm came out of a group of storm cells, and first touched down in a rural area about eight miles from the city. The twister killed a family of 13, sweeping their house away as the tornado made its way toward Tupelo. Many more were injured before it even reached the city. The tornado was retroactively rated an F5 on the Fujita scale, it caused total destruction along its path through the Willis Heights neighborhood. In that area were a number of well-built large mansions that were blown away like a house of cards.

The tornado missed the business district, and instead hit residential areas, sadly…increasing the death toll. The Gum Pond area of Tupelo was the worst hit. Homes along the pond were swept into the water with their 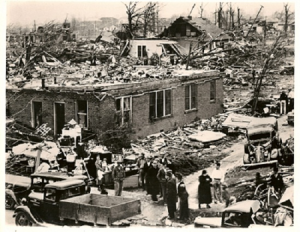 victims. The majority of the bodies were found in Gum Pond, the area which is now Gumtree Park, but many bodies were never recovered from the pond at all. The winds were so strong, that pine needles were embedded into trunks of trees. The tornado took out the large concrete Battle of Tupelo monument as it exited the city’s east side. According to records, the Tupelo tornado leveled 48 city blocks and between 200 and 900 homes. It officially killed at least 216 people and injured at least 700. The tornado destroyed the water tower and produced numerous fires in its wake. Thankfully, overnight rains, which left knee-deep water in some streets put out the fires. Though 216 remained the final death toll, 100 persons were still hospitalized at the time it was set. Subsequently, the Mississippi State Geologist estimated a final, unofficial death toll of 233. Surprisingly, one-year-old Elvis Presley and his parents were among the survivors, a fact I never knew about him.

After ravaging Tupelo, the storm system moved through Alabama overnight and reached Gainesville, Georgia, at around 8:30am. When the storm hit Gainesville, it became a double tornado event. One tornado moved in from the Atlanta highway, while the other moved in from the Dawsonville highway. As they came into town, the two tornadoes then merged into one on Grove Street and destroyed everything throughout the downtown area…leaving 10 foot high piles of debris in some places. The worst tornado-caused death toll in a single building in United States history was at the Cooper Pants Factory. The multiple-story building was then filled with young workers, who had just arrived to work. The structure collapsed and caught fire, killing about 70 people. At the Pacolet Mill, 550 workers moved to the northeast side of the building and survived. Many people sought refuge in Newman’s department store, and its collapse killed 20 people. In addition to the complete destruction that occurred throughout downtown Gainesville, residential areas throughout the city were 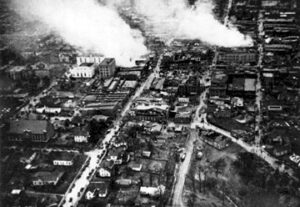 devastated as well, where 750 homes were destroyed, and 254 others were badly damaged.

The Tupelo-Gainesville Outbreak took the lives of 454 people, 419 by the two main two tornadoes alone. This outbreak is the second deadliest ever recorded in United States history. Although the outbreak was centered on Tupelo, Mississippi, and Gainesville, Georgia, where the fourth and fifth deadliest tornadoes in United States history respectively occurred, other destructive tornadoes associated with the outbreak hit Columbia, Tennessee; Anderson, South Carolina; and Acworth, Georgia.