What You Didn’t Know 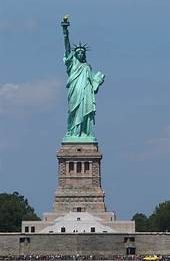 I have been to and inside the Statue of Liberty, and it is a place I’ll never forget. I was a teenager at the time, but I can still vividly picture the inside, as well as the outside. I think the thing that most stuck in my head is that to go up into the statue was a rather tight corridor. The arm was closed when we were there, but we didn’t really know why. For a time, especially after 9-11, no one was allowed to go into the Statue of Liberty at all, for fear of another terrorist attack.

Prior to the 9-11 concerns, the Statue of Liberty was examined by French and American engineers for structural stability in 1982, as part of the planning for its centennial in 1986. Following the examination, it was announced that the statue was in need of considerable restoration. Careful examination had revealed that the right arm 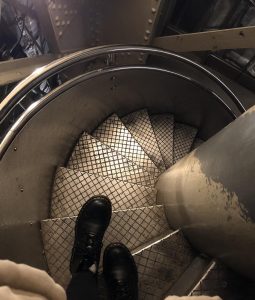 had been improperly attached to the main structure. It was swaying more and more when strong winds blew and there was a significant risk of structural failure. This is information that I’m thankful I didn’t have when I went up into the statue in 1973. I recall being disappointed that we couldn’t go up in the arm then, but apparently they knew of the issues even then. Of further concern, the head had been installed 2 feet off center, and one of the rays was wearing a hole in the right arm when the statue moved in the wind. All the problems warranted the repairs done in 1984. She also got a nose job and her arm was shifted slightly to a better position. This information, though not well know, was really bad news, when you think about it. The statue had been standing in this place for 96 years by the time these flaws were discovered. Imagine what could have happened, especially with the arm improperly 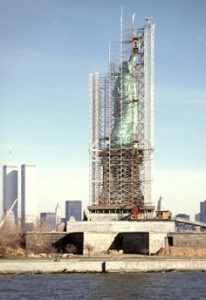 installed. The armature structure was badly corroded, and about two percent of the exterior plates needed to be replaced. Although problems with the armature had been recognized as early as 1936, when cast iron replacements for some of the bars had been installed, much of the corrosion had been hidden by layers of paint applied over the years. The whole statue was literally a ticking time bomb. Following the repairs, the statue would be much safer and could again be used, but that was not the end of her secrets.

Most people think that the Statue of Liberty was a gift from the nation of France, and while it did come from France, it was actually partly a gift from the manufacturer in France (not the French nation). on top of that, Americans had to pay for the pedestal and partly contributed to the cost of the statue itself. Fundraisers were held in Boston and Philadelphia, in order to win the right to have the statue, but in the end, it went to New York. I’m sure many people who helped with the fundraising were very disappointed. This was another secret of the Statue of Liberty that I did not know.