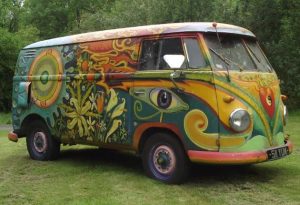 There was something that was unique, in my mind, to the Hippie Generation, and that was the Volkswagen Bus. I’m sure it was a coincidence that the VW Bus came out about the time that the whole “free love” ear was happening, but I would think that it was every parents nightmare, because it supplied a rolling motel room for kids on dates, and remember that the parents were pretty much against the whole “free love” thing. In fact, I’m quite sure it totally terrified them, because not only were their girls dating this guy was a rolling motel room, but this guy was…well, very different from the kind of man they had always hope their daughter would marry. My son-in-law, Kevin Petersen grew up around vans. His parents were at the right age to really be a part of the Hippie Generation, although I don’t know if they were really involved or not. They did love vans, however, and fixed theirs up to show.

The VW Bus, for it’s part, was the brainchild of Dutch businessman Ben Pon, an importer of the Volkswagen Beetles to the Netherlands. Pon saw a market for a small bus and in 1947 sketched out his concept. The bus went into production on March 8, 1950…technically before the Hippie Generation, so I suppose the Hippies adopted the VW Bus, and not the other way around. Known officially as the Volkswagen Type 2 (the Beetle was the Type 1) or the Transporter, the bus was a favorite mode of transportation for hippies in the United States during the 1960s and became an icon of the American counterculture movement. The bus eventually collected a number of nicknames, including the “Combi” (for combined-use vehicle) and the “Splittie” (for its split windshield); in Germany it was known as the “Bulli.” In the United States it was referred to by some as a hippie van or bus because it was used to transport groups of young people and their camping gear and other supplies to concerts and anti-war rallies. Some owners painted colorful murals on their buses and replaced the VW logo on the front with a peace symbol.

The Volkswagen Bus was only the second vehicle built by Volkswagen, a company whose history dates back to the 1930s Germany. In 1933, Adolf Hitler became chancellor of Germany and announced he wanted to build new roads and affordable cars for the German people. At that time, Austrian-born engineer Ferdinand Porsche (1875-1951) was already working on creating a small car for the masses. Hitler and Porsche later met and the engineer was charged with designing the inexpensive, mass-produced Volkswagen, or “people’s car.” In 1938, work began on the Volkswagen factory, located in what is now Wolfsburg, Germany. Full-scale vehicle 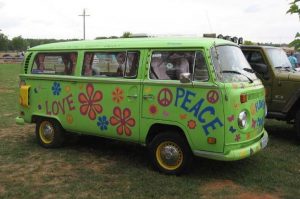 production didn’t begin until after World War II, however. In the 1950s, the Volkswagen arrived in the United States, where the initial reception was negative, due in part to the car’s historic Nazi connection as well as its small size and unusual rounded shape (which later led to it being dubbed the “Beetle”). In 1959, the advertising agency Doyle Dane Bernbach launched a groundbreaking campaign that promoted the car’s diminutive size as a distinct advantage to consumers, and over the next several years Volkswagen became the top-selling auto import in the United States. In 1972, the VW Beetle passed the Ford Model T as the world’s best-selling car, with over 15 million vehicles produced.