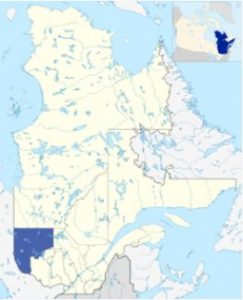 I suppose that if I lived in Quebec, Canada, I might have heard the Abitibi-Témiscamingue region and maybe even the Western Quebec Seismic Zone. Since I don’t, these areas are new to me. Maybe they were new to a lot of people, but on November 1, 1935, a lot more people knew about them. On that day, a 6.1 magnitude earthquake with a maximum Mercalli intensity of VII (Very strong) occurred. The epicenter occurred on a thrust fault in the Timiskaming Graben, a little over 6 miles northeast of Témiscamingue, at about 1:03am ET.

While the earthquake was in Canada, it was felt over a wide area of North America, extending west to Fort William (now Thunder Bay), east to Fredericton, New Brunswick, north to James Bay and south as far as Kentucky and West Virginia. Occasional aftershocks were reported for several months. That seems extreme for a 6.1 magnitude earthquake, but I suppose it’s all in the connections. Fault lines aren’t just in a small area, they run for hundreds and even thousands of miles.

The most significant damage from the earthquake, both in the immediate area and as far south as North Bay and Mattawa, was to chimneys. In fact, 80% of the chimneys in that area were destroyed. A railroad embankment near Parent, which is 186 miles away, also collapsed. It looked like the embankment slide was already imminent, but the quake vibrated the last holds loose. There were some rockfalls and structural cracks reported as well. Thankfully, there were few major structural collapses aside from the Parent embankment. The