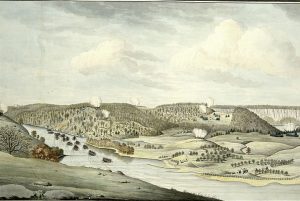 When one side of a war takes control of an area or a fort belonging to the other side, they often change the name of the area or fort to reflect the name of the hero who laid siege on it. Lieutenant General Wilhelm von Knyphausen became a British hero in 1776, when he and a force of 3,000 Hessian mercenaries and 5,000 Redcoats laid siege to Fort Washington at the northern end and highest point of Manhattan Island on November 16, 1776.

Throughout that morning, Knyphausen met stiff resistance from the Patriot riflemen inside, but by afternoon, the Patriots were overwhelmed, and the garrison commander, Colonel Robert Magaw, surrendered. Nearly 3,000 Patriots were taken prisoner, and valuable ammunition and supplies were lost to the Hessians. The prisoners faced a particularly grim fate, because many later died aboard British prison ships anchored in New York Harbor. Among the 53 dead and 96 wounded Patriots were John and Margaret Corbin of Virginia. When John died in action, his wife Margaret took over his cannon, cleaning, loading, and firing the gun until she too was severely wounded. The first woman known to have fought for the Continental Army, Margaret survived, but lost the use of her left arm. Margaret Cochran (Corbin) was born in Western Pennsylvania on November 12, 1751 in what is now Franklin County. Her parents were Robert Cochran, a Scots-Irish immigrant, and his wife, Sarah. In 1756, when Margaret was five years old, her parents were attacked by Native Americans. Her father was killed, and her mother was kidnapped, never to be seen again. 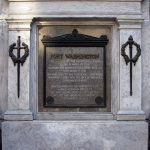 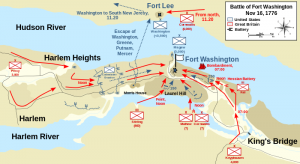 Margaret and her brother, John escaped the raid because they were not at home. They lived with their uncle for the rest of their childhood. Margaret became a survivor…not a victim, and I’m sure that was why she picked up where her husband left off and fought as well as any man there.

While Margaret, her husband, John, and many others showed great heroics in the attack, not everyone involved in Magaw’s army, were heroes. Two weeks earlier, one of Magaw’s officers, William Demont, had deserted the Fifth Pennsylvania Battalion and given British intelligence agents information about the Patriot defense of New York, including details about the location and defense of Fort Washington. Demont was the first traitor to the Patriot cause, and his treason contributed significantly to Knyphausen’s victory. What a vast difference there was between this horrible, traitorous man and the very brave Margaret Corbin!!

After the siege, and in honor of Lieutenant General Wilhelm von Knyphausen, who had stormed the post five days earlier, British Commander in Chief General William Howe renamed Fort Washington, “Fort Knyphausen” on November 17, 1776. It was a devastating loss to the patriots. Today, the site of Fort Washington is Bennett Park on Fort Washington Avenue, between West 183rd and West 185th streets in the neighborhood of the 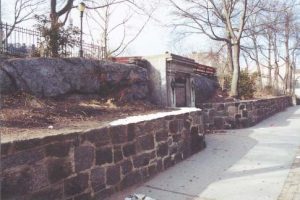 Washington Heights section of New York City. The locations of the fort’s walls are marked in the park by stones, along with a tablet commemorating the location of Fort Washington, and the brave troops who took back the fort on their triumphal entry into the city of New York on November 25, 1783. Nearby is a tablet indicating that the schist outcropping is the highest natural point on Manhattan Island, one of the reasons for the fort’s location. Bennett Park is located a few blocks north of the George Washington Bridge. Along the banks of the Hudson River below the Henry Hudson Parkway is Fort Washington Park and the small point of land alternately called Jeffrey’s Hook or Fort Washington Point, which is the site of the Little Red Lighthouse.